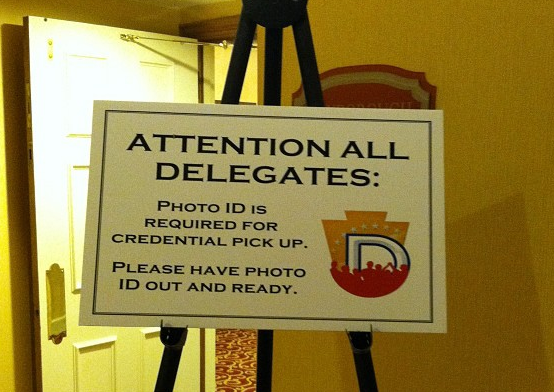 Democrats representing Pennsylvania at the Democratic National Convention have spent a great deal of time criticizing the state’s new voter ID law. But as the PA Republican Party notes, Dems are enforcing their own ID policy in Charlotte.

“The fact that the Pennsylvania Democrats are requiring photo ID to pick up credentials at its own convention is the height of hypocrisy,” said Chairman Rob Gleason. “The sensational arguments that Democrats have been making against Voter ID simply lose all credibility in this one Twitter photo [above].”

The picture was posted by Salena Zito of the Pittsburgh Tribune-Review.

“It is hard to fathom that Democrats are more concerned about protecting their convention than protecting the integrity of Pennsylvania’s election but the fact they implemented their own ‘Voter ID’ in Charlotte proves it” Gleason continued.

PA Dems spokesman Mark Nicastre said the comparison was invalid, and dinged the PAGOP over news that two high-profile Republican-favoring super PACs have decided to pull out of Pennsylvania.

The state’s voter ID law was upheld in the PA Commonwealth Court last month, and next week heads to the PA Supreme Court for its appeal. In the meantime, the state has unveiled various efforts aimed at providing IDs at no cost to those who don’t have them.