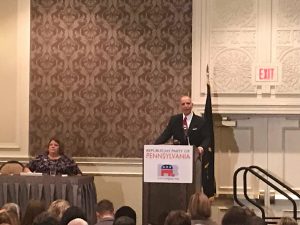 HERSHEY- The contest for Pennsylvania Republican Party Chair came to an end yesterday when Lawrence Tabas and Bernie Comfort released a joint statement agreeing to a truce making Tabas party chair and Comfort the Trump 2020 Campaign Chair for Pennsylvania.

Today, Comfort and Tabas touted their friendship and commitment to the party to signify the beginning of a new era within the Pennsylvania Republican Party after a contentious two and a half weeks competing for chair since the resignation of former Chair Val DiGiorgio, after the Philadelphia Inquirer detailed him exchanging sexually charged messages and an “explicit photo” with a GOP Philadelphia City Council hopeful..

“We are a family,” said Tabas, the former state GOP counsel and new leader of the PAGOP. “Families have disagreements. But it’s not necessarily disagreements about what the ultimate goal is. We know and share that.”

Tabas fell just a couple votes shy of becoming party chair against DiGiorgio in the heated 2017 race, but was voted unanimously today by state committee members present for the emergency meeting.

In a symbol of unity, Comfort was the first to nominate Tabas lauding him as “one of the best election lawyers in the country” and explained her reason from stepping out of the race one day prior to the vote. 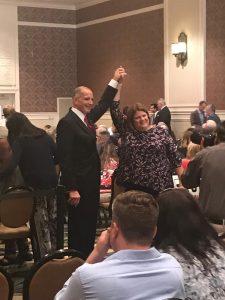 “As we all talked for the last three weeks, what came clear was that we were heading to a divided vote and a divided party,” Comfort said. “That was not acceptable to me or to Lawrence.”

Sources tell PoliticsPA that insiders on both sides were predicting a Tabas victory in a contested vote just 24 hours after the Philadelphia Inquirer released a story that Comfort ignored sexual harassment claims from women in the party made towards DiGiorgio, which she denies.

After Comfort praised the career of Tabas, the new chair returned the favor by detailing his admiration for Comfort and pointed their focus to re-electing President Donald Trump in the process.

“I consider myself very lucky, because going into this chairmanship I’m going to have right by my side as a partner a very good friend,” Tabas said of Comfort, who will stay on as Vice Chair in addition to her new role as Trump 2020 PA Campaign Chair.

“But if there’s just one thing that you remember as a takeaway, let me say this, and let me say it clear” Tabas said. “There is no way the Republican Party of Pennsylvania is going to allow Donald Trump to lose this state next year.” 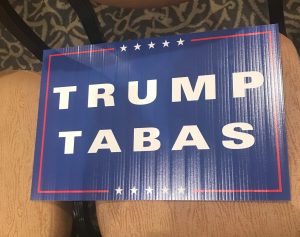 Signs of “Trump Tabas” were scattered throughout the room as state committee members waved them in the air to express their optimism of keeping Pennsylvania red going into 2020.

After the election of Trump, who was the first Republican to capture the state’s 20 electoral votes since 1988, the state party has suffered some significant defeats. Despite holding a majority in the state House and Senate, the previous election saw Democrats take a chunk of seats back, evening the Congressional delegation at 9 members each after redistricting, while Gov. Tom Wolf and Sen. Bob Casey coasted to reelection over two Trump friendly candidates.

Tabas touched on the recent party losses and promised that the new leadership will lead a new winning effort in the state.

Tabas and Comfort both stressed at length the need for reelecting Trump, but pointed to the 2019 races for Superior Court as crucial races. Both GOP Superior Court candidates, Megan King and Christylee Peck were in attendance and delivered speeches after Tabas was formally elected chair.