The drought of presidential television ads is over. The Pa. Republican Party this morning launched a TV spot blasting President Barack Obama. 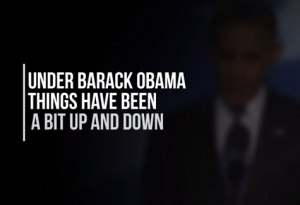 PAGOP Chair Rob Gleason has said last week that the party would go on the air soon, in part to combat the narrative that Pa. is out of play and that no presidential campaign ads were on television in Pennsylvania (they hadn’t been for weeks, aside Obama campaign spots running on national cable).

“The Republican Party of Pennsylvania is excited to launch a television ad that focuses on a simple message: President Obama owns the fact that unemployment is up by 495,000, that U.S. home values are down by $18,400, that the average wage for the American worker is down $4,019, that the national debt is up by 51%, and that the price of a gallon of gas has gone up by 108%, and it’s clear that Pennsylvanians can’t afford four more years of President Obama’s failed record,” said Gleason, repeating the points made in the commercial.

The ad’s only audio is repeated clip of Obama saying “I’m the President,” as text appears offering statistics about the economy during his first term.

The ad is paid for by the Republican Federal Committee of Pa., the state party’s PAC for federal expenditures. They aired ads in 2008, too.

It looks like an effort to rally the base more than to win over undecided voters. Republicans from around Pa. gather this weekend in Camp Hill for their fall state committee meeting. This ad, considered along with Mitt Romney’s visit to Pa. today, plus the party’s internal poll from last week showing the presidential race within one point, allows the PAGOP to give party activists cause for hope – and motivation to keep canvassing.

The party declined to disclose the size and scope of the buy. A PoliticsPA look at Federal Elections Commission filings by some of the most common Pa. stations for campaign ads didn’t turn anything up. Based on prior GOP campaigns, our hunch is that this is a statewide buy on cable – probably Fox News.

Or, it’s entirely possible that the ad will air an insignificant number of times and that releasing it is a play for earned media – an effort to combat the narrative. Both parties have pulled from that playbook before.