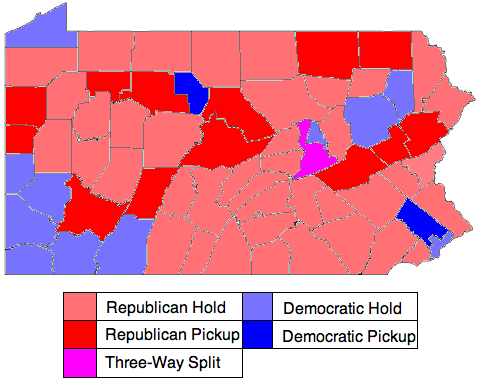 Update: Republicans have flipped the Mercer County Courthouse, according to Director of Elections Jeff Greenburg.

After about 800 absentee ballots were counted, Republican John Lechner defeated Democrat Timothy Templeton, winning the third Commissioner seat by 26 votes – 9,398 to 9,372. He overcame a 30 vote deficit before absentees were counted. The results are unofficial, but Greenburg said they were very likely to stand. He said based on historical trends, he “would be shocked if we got even one,” absentee ballot from a member military of civilian overseas by tomorrow’s deadline. Templteton has the ability to request a recount, but Greenberg said it is unlikely to change the outcome.

Republicans increased their control of Pennsylvania counties by 12 on Tuesday, picking up courthouses across the state and growing their total from 40 to 52. Northumberland County (formerly Dem majority) is now split three ways including one Independent Commissioner.

New GOP majorities popped up in several regions, but most of the counties showing Republican gains have a few thing in common. They tend to be in northeastern or western PA where local Democratic organizations are on the wane and long term demographic trends favor Republicans.

The clearest example of such a county is Westmoreland, where Republicans swept all countywide offices and also took the majority of the Board of Commissioners for the first time in 65 years.

On the other side of the coin, Democrats scored a huge win in Montgomery County, once the strongest bastion of GOP local organization in Pa. There, Josh Shapiro and Leslie Richards became the first Democratic Commissioners in county history.

In Allegheny County, Democrat Rich Fitzgerald won the County Executive seat by a 24 point margin. Democrats also picked up the majority in Cameron County, Pa.’s smallest, in the north-central part of the state. Luzerne County, which passed home rule, elected its first County Council this year – six Democrats, four Republicans and one Independent.

But that’s about it for countywide Dem success across the state. Republicans held on to seats in the other three counties of suburban Philadelphia – Bucks, Chester and Delaware – despite spirited challenges there. The GOP also kept on to all four seats of the Lehigh County Council. The following Republicans won control of 12 counties:

“I would like to personally thank State Party members and volunteers who went to work talking to their neighbors, stuffing envelopes, making phone calls and knocking on doors to support our Republican teams. It is clear that we still have the best grassroots network in Pennsylvania and they continue to deliver victories,” he said.