Sarah Palin has been deliberately secretive about the details of her ongoing bus tour, leaving many Pennsylvania activists frustrated at the seeming lack of acknowledgement from the conservative icon. 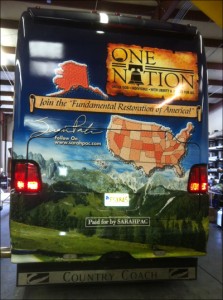 News that the former Alaska Governor and 2008 Vice Presidential candidate was taking a bus tour through the Commonwealth broke on Thursday, but excitement turned to disappointment for many PA conservatives, who have had to rely on scattered news reports for details of her itinerary.

After unveiling news of her trip and the campaign-style design of her tour bus on the SarahPAC website, Palin has maintained near silence with local activists as well as the press. Through the dutiful tracking of several journalists, supporters learned that Palin arrived in Gettysburg yesterday evening and that she will likely tour the battlefield this morning. She’s expected to travel to Philadelphia later today.

Privately, conservative leaders say that Palin’s radio silence reflects at best a serious lack of foresight, and at worst a sign of disrespect.

PoliticsPA reached out to nearly a dozen separate statewide and local Tea Party and Republican organizations, representatives of which said they tried reaching out to Palin with no success.

“We all support Mrs. Palin’s message and her talents and abilities, but we wonder if she’s going on a family vacation, then why is it billed as a political trip on her website,” said Don Adams, President of the Philadelphia-based Independence Hall Tea Party PAC.

Palin’s website describes the “One Nation Tour” as, “part of our new campaign to educate and energize Americans about our nations founding principles, in order to promote the Fundamental Restoration of America.”

“I think it sends a mixed message,” Adams continued. “So many Tea Party members wanted to see her, but there’s been no communication. We know she’s going to Independence Hall, but we don’t know when.”

Adams traveled to New York City to join the protest against David Letterman when the Late Night Show host made inappropriate comments about Palin’s daughter, Willow. He said his group reached out to Palin through several channels, and expressed disappointment that they hadn’t gotten any response.

Republicans and Tea Partiers for the most part have been hesitant to criticize Palin openly, but many have expressed their frustration on the condition of anonymity.

“How many American families travel with a national reporter while on vacation?” asked one Tea Party leader, referring to the fact that Fox News’ Greta Van Susteren has accompanied Palin on the bus.

“It’s poor campaigning to send out a press release with no information,” said one member of the Adams County 9-12 Patriots. “If they really wanted people to come out and visit her why didn’t they include more?”

While disappointed, others are giving Palin the benefit of the doubt.

“I suspect it is because she is truly visiting various sites to pay homage to our fallen servicemen and women. I can only surmise that they are trying to keep the focus on that and not trying to
make the tour overly political,” says Lowman Henry, President of the conservative Pennsylvania  Leadership Conference. “On the other hand, there are a lot of folks who would like to join her in honoring our troops, so a bit of advance notice on where she plans to be would be nice.”

Adams County GOP Chairwoman Elizabeth Hower said she would have liked details so that supporters could have welcomed Palin to the area, but said that she wasn’t frustrated and that Palin’s decisions are “private.”

“She should have made clear it was a family vacation, then no one would have been frustrated. People naturally want to think that she would want to meet with her supporters. Supporters came to see her and instead will to see the battlefield. So there’s an upside. When the hubbub dies down, I appreciate the press given to these areas and historical sites.”

“The press is more frustrated than supporters,” Hower said.