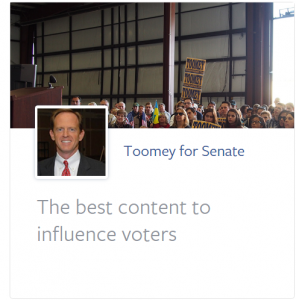 Facebook wants to convince campaigns to spend more on social media, and the site is using Pat Toomey’s 2016 Senate campaign to do it.

“This campaign used a made-for-Facebook, audience-specific content strategy to significantly shift voter intent and increase favorability for a US Senate candidate from Pennsylvania, contributing to his re-election,” the site boasts in a new case study.

Facebook didn’t publish the numbers, but the Toomey campaign said it spent close to $2.8 million on its digital strategy, with a large portion of that going to the social media site.  The campaign spent $27.7 million in the election, making digital about 10% of the total spending.

For comparison, a source close to the Katie McGinty campaign said it spent around $1.3 million on digital strategy during the general election, about 8% of $16.2 million in total 2016 spending.

There is no way to prove definitively that digital spending put Toomey over the edge. The race came down to 86,690, just 1.4% of the 6 million total votes cast, and a number of factors contributed to the outcome.

However, the early decision to invest in digital proved prudent. Candidates and outside groups spent a combined $166,744,704 in the race, making it the most expensive U.S. Senate contest in history (a breakdown of traditional-vs-digital spending by outside groups was not available). That plus a competitive presidential race meant that $2.8 million couldn’t move as many votes – or buy as many ads – through traditional channels.

“We created hundreds of pieces of of original content, from short videos, to Medium posts about the Senator and against McGinty that we were able to use on Facebook and other digital advertising,” Harris said.

The 2016 race is part of the evolving world of political campaigns. Increasingly, campaign spending is trending toward targeting voters on an individual basis.

J.J. Balaban is a Democratic strategist who has worked for statewide campaigns including Joe Sestak (who narrowly lost to Toomey in 2010). He agreed with the Toomey campaign’s digital approach.

“The fundamental organizing principle of almost every non-presidential campaign is scarcity of resources – something that is less of a factor in presidential campaigns. In the past couple cycles, there has been so much more money poured into these US Senate campaigns that they are becoming, in effect, mini-presidential races,” Balaban said.

“That gives well-resourced Senate campaigns the flexibility to employ presidential-level tactics, and a smart Senate campaign will use that advantage to do things differently.”