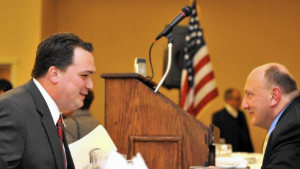 The FBI’s investigation into contracting practices at Allentown City Hall has claimed another scalp.

Fleck is facing up to 10 years in federal prison, though he has been cooperating with the FBI’s investigation of old-school pay-to-play contracting practices in Allentown city government.

In early July 2015, the FBI raided Allentown City Hill looking for contracts dating back over a decade. Just hours before the raid, Pawlowski discovered his best friend, Fleck, was wearing a wire for the agency.

Though Mayor Pawlowski remains in office, it is still unclear whether he will serve out his term, with the Allentown City Council urging him to resign, or if he will face federal charges.

Allentown Council President Ray O’Connell is calling on Pawlowski to resign once again in the wake of Fleck’s plea.

“Each day this web becomes more entangled,” O’Connell told the Morning Call. “Each day the cloud over the city becomes darker. Each day as we move forward, the uncertainty grows in the ability of the mayor to lead this city.”