Peduto Hits the Airwaves (With Video)

City Councilman Bill Peduto unveiled his first television ad of the Pittsburgh mayoral primary on Friday. High production values and that candidate’s family history paint a clear contrast between Pittsburgh’s past and its future.

It seeks to emphasize Peduto’s deep roots in the city as well as his thorough policy platform.

“That Pittsburgh is gone now,” Peduto says, against footage of him walking by run down places where his relatives used to work. 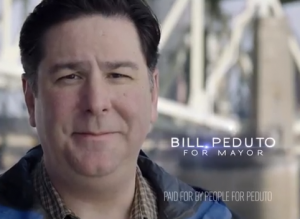 “I’m Bill Peduto, and my life’s work is building a new Pittsburgh. With a 21st century infrastructure plan, job training and a partnership with our universities, and strengthening neighborhood businesses.”

“We need a mayor who never forgets what we can be.”

Peduto’s chief rival in the Democratic primary is former Pa. Auditor General Jack Wagner. He went on the air Thursday – 40 days before election day – with his own bio spot.

Given how uncommon it is for campaigns to debut on a Friday, and based on casual conversations with a few Pittsburgh television stations, it appears that Peduto’s camp accelerated its own TV plans in light of Wagner’s buy.

Update: Peduto’s camp says their ad buy started as it had been scheduled and was not affected by Wagner’s move Thursday. They said additionally that they are on WPXI, although the FCC has yet to post details of the buy for the station.

State Rep. Jake Wheatley and activist A.J. Richardson are also running in the primary; neither has demonstrated the ability to win.