City Councilman Bill Peduto paints his opponent with a Republican brush in the latest television ad of the Pittsburgh mayoral primary. It criticizes Jack Wagner for speaking approvingly of GOP policies and highlights past votes to increase his pay and pension. 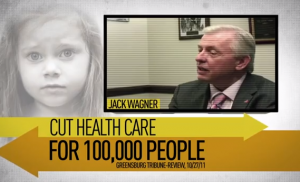 “What kind of leader is Jack Wagner? He sided with Republicans when they cut Meals on Wheels for seniors. Wagner wanted to cut health care for 100,000 people, even including children,” says a narrator.

“Meanwhile, Jack Wagner voted for automatic pay raises that increased his salary more than $17,000. Then, voted to raise his pension 50%.”

It’s the fourth ad of the race and follows positive, introductory spots from both candidates and a second positive ad from Wagner. This commercial and Peduto’s first spot were produced by DC-area Putnam Partners.

The ad’s points about Wagner and the GOP stem from the former Auditor’s support for several of the premises behind the Republican state budget in 2011.

That he would elect to go negative reinforces the narrative that Peduto is looking to catch up with Wagner. Most polls of the race have shown the former state Auditor General in the lead among likely Democratic voters, owing in part to his high name ID.

Wagner spokesman JJ Abbott did not address the content of the ad and instead criticized Peduto for airing a negative commercial.

“It is unfortunate for the people of Pittsburgh that Bill Peduto has dragged this campaign into the mud. But it’s really no surprise given Bill Peduto’s past. Bill began his career running a dirty campaign and clearly nothing has changed,” Abbott said.

“Councilman Peduto’s negative, divisive behavior has created a culture of dysfunction in City Hall. City Government is broken exactly because of Bill Peduto’s childish politics and his inability to play well with others. Pittsburgh desperately needs a change, but all we’ve seen from Bill Peduto is more of the same.”

State Rep. Jake Wheatley and activist AJ Richardson are also running in the Democratic primary, though neither has polled above single digits.