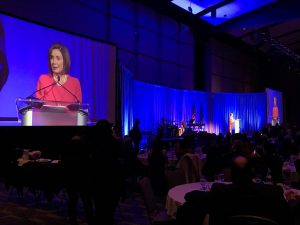 PHILADELPHIA- Just one day after the House of Representatives voted to pass a resolution into an impeachment inquiry into President Donald Trump, House Speaker Nancy Pelosi headlined the Pennsylvania Democratic Party’s Inaugural “Independence Dinner” in Philadelphia and discussed the decision that led to the vote.

The impeachment resolution, which passed 232-196 with all 9 members of the state’s Democratic Congressional delegation voting for it, comes six weeks after President Donald Trump’s phone call with Ukrainan President Volodymyr Zelenskiy urging him to look into former Vice President Joe Biden’s son’s business dealings in the country, became public.

“No decision has been made to impeach the president,” Pelosi continued. “That’s a question of what the inquiry will produce.”

The subject of impeachment among Pennsylvania Democrats has evolved significantly in 2019. Entering the month of May, only Rep. Dwight Evans (D-Philadelphia) supported an impeachment inquiry, but by the month of June, Reps. Brendan Boyle (D-Philadelphia), Madeleine Dean (D-Montgomery), and Mary Gay Scanlon (D-Delaware) issued their support for the move. Shortly after the phone call with Trump and Zelenskiy became public in late September, the rest of the states Democratic Congressional delegation and Sen. Bob Casey offered support for the inquiry.

During her 30 minute speech at the Convention Center, Pelosi talked about the role that Philadelphia played in the birth of the country and constitution and drew a parallel on the importance of today’s events with Trump. Pelosi quoted Thomas Paine’s famous “the times have found us” line to compare to what Congress should do with Trump’s impeachment inquiry.

Trump has consistently denied any wrongdoing and often calls the impeachment inquiry a “witch hunt.” On Friday, Trump shot out a tweet saying that “You can’t Impeach someone who hasn’t done anything wrong!”

Although impeachment was on everybody’s mind, Pelosi and various elected Pennsylvania Democrats who took the stage also wanted to detail their legislative focus on the economy, healthcare, and more.

Pelosi’s most pointed criticisms came at Trump and Senate Majority Leader Mitch McConnell (R-KY) for a number of bills that Democrats have passed in the House, but haven’t advanced in the Senate.

Sen. Bob Casey lauded Pelosi’s leadership in his 10 plus minute speech, but particularly pinpointed healthcare as a rallying point for Democrats with language that Pennsylvanians aren’t used to hearing from their senior senator.

“I have a name for this lawsuit,” Casey said when talking about a lawsuit that is determining the constitutionality of the Affordable Care Act. “It’s not Texas vs the United States. I’m not going to use a name like that.”

“I’ve got a very special name for this lawsuit,” Casey continued. “I call it the goddamn lawsuit.” 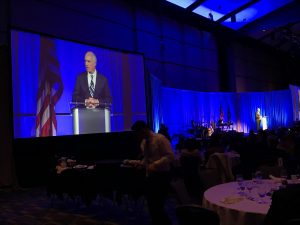 Casey described Trump and Republicans in Congress’s effort to repeal the Affordable Care Act as a “triple threat,” which he said was through a “lawsuit, sabotage, and the budget cut.”

While Casey said he wasn’t sure if those in Washington were doing enough to protect the ACA, Gov. Tom Wolf spent about 8 minutes talking about the work his administration has done in Harrisburg and what the focus needs to be moving forward.

Wolf painted a picture of a Pennsylvania that has made “great progress” during his four plus years in office, although he said next year’s presidential election is particularly important from those in the past.

Wolf said that next year’s election, more than any, is a vote that “civilization hangs in the balance.”

Although various speakers talked about the state voting for Trump in 2016, which is the first time a Republican presidential candidate won the state since 1988, they were sure to detail the victories for the three statewide “row offices” that same night.

Auditor General Eugene DePasquale, who is seeking the Democratic nomination for the 10th Congressional District in 2020, Attorney General Josh Shapiro, who is up for reelection in 2020, and Treasurer Joe Torsella, who is also up for reelection in 2020, all won their races in 2016, and took the stage and pointed to their records in office as proof that they are helping Pennsylvanians.

While the night was largely centered around each elected official touting their record and thanking Pelosi, another Democratic official received recognition at the Inaugural Independence Dinner. 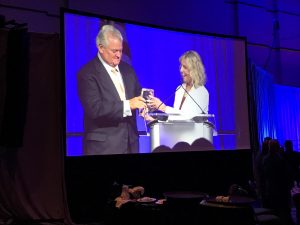 Brady thanked Mills and the party for the award, but also spoke glowingly of Pelosi as he introduced her onto the stage. He served with Pelosi for over 2 decades and credited her as “the best boss I ever had,” as well as “the strongest, fairest, best leader, and classiest we ever had in Congress.”

Pelosi returned compliments to various elected officials present and also called Brady the “Mayor of Capitol Hill,” when he served.

Hosted by La Colombe founder Todd Carmichael.
Seeking donations of up to $11,200 pic.twitter.com/KNrWhnssYZ