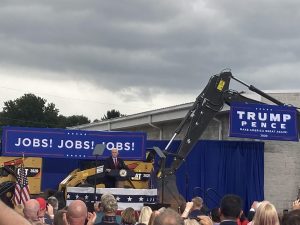 The presidential campaign is in full swing. Pence’s visit – sandwiched between Pa. stops by President Trump and former VP Joe Biden – 63 days before the election. The VP urged Pennsylvanians to support Trump in 30 minute plus speech.

“I know we’re not too far from our opponent’s boyhood home,” Pence said. “But it’s Trump country now.”

“Four years ago a movement was born,” Pence said. “And judging from this crowd and everybody I saw on the way here, it looks like that movement is doing just fine in Pennsylvania.”

Trump’s victory in 2016 in large part can be credited to him winning over voters in Northeast Pa, specifically flipping Luzerne County, where Pence spoke on Tuesday afternoon. But polling shows him as an underdog to repeat his 2020 win. A Franklin & Marshall College poll released on Aug. 27 showed Biden leading Trump by 7 points, 49-to-42, in the Keystone State. A Morning Call/Muhlenberg College poll released just one week earlier, Aug. 20, showed a tighter race with Biden holding a 4 point advantage, 48-to-44. The Real Clear Politics average shows Biden holding a 4.7% lead over Trump in the state.

NEPA has been a point of emphasis for the Trump campaign. Trump expressed a similar message to voters in Old Forge on Aug. 20, the same day that Biden formally accepted the Democratic Party’s presidential nomination.

During Biden’s Monday speech in Pittsburgh, he accused Trump of fanning the flames of riots in several cities, while also condemning these riots. Pence fired back on those claims.

“The truth is, Joe Biden would double down on the policies that have led to violence in America’s cities. You won’t be safe in Joe Biden’s America,” Pence said. “President Trump and I will always support the rights of Americans to peaceful protest, but rioting and looting is not peaceful protesting. Burning businesses is not free speech, and those who do so will be prosecuted to the fullest extent of the law.”

On the economy, Pence touted the economic numbers prior to the coronavirus pandemic and said that the “great American comeback is happening.”

Despite the event’s billing as ‘Workers for Trump,’ Biden’s campaign said the administration has been strongly anti-worker.

“It’s deeply cynical that Mike Pence is choosing to brand this event as one for ‘workers,’ considering the Trump-Pence Administration has been one of the most anti-worker and anti-union administrations in modern history,” said Deputy Campaign Manager Kate Bedingfield.

“Northeastern Pennsylvanians know that at every opportunity – from the 2017 tax bill to COVID-19 relief – the Trump-Pence White House has actively chosen to pad the pockets of wealthy Republican donors and rich CEOs while neglecting working Pennsylvanians.”

Pence also touched on natural gas drilling. Biden strongly refuted the claim that he would ban fracking in Pittsburgh. But the current VP said the former VP would ban drilling by default by virtue of his support for 100% renewable energy in the future.

“Whatever you may hear, over every day that remains between now an election day, Joe Biden and the radical left are going to try to ban fracking and abolish fossil fuels, but we’re not going to let it happen,” Pence said.

Two of the GOP’s top congressional challengers warmed up the crowd before Pence’s speech. 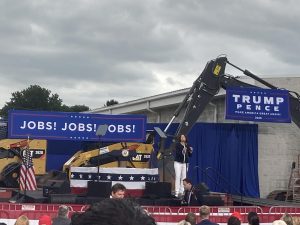 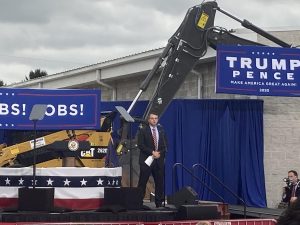 “Nancy Pelosi, Joe Biden, and Matt Cartwright, they stand silently by as this mayhem happens. Sometimes it even seems like they are cheering it on,” he said. “We know that the people of northeastern Pennsylvania don’t want somebody in Congress who’s going to roll over for his party as Matt Cartwright has. We want somebody that will stand up for northeastern Pennsylvania values.”

Cartwright is currently serving his fourth term in Congress; he defeated Republican John Chrin by just over 9 points in 2018. In 2016, Trump carried these boundaries by close to 10 points in 2016, while Cartwright fended off Republican Matt Connolly by a 7.6 point margin.

Below is Pence’s full address.