CAMP HILL- One day after sitting behind President Donald Trump at the State of the Union address in Washington D.C., Vice President Mike Pence took to Pennsylvania for the first time in the presidential election year to take a victory lap on Trump’s acquittal from impeachment from the U.S. Senate and court voters that will be key in determining who carries the keystone state in November.

“It’s been an incredible week,” Pence said on Wednesday evening while headlining a “Women for Trump” rally in Camp Hill. “I gotta tell you, I’m here for one reason and one reason only, and that is that Pennsylvania and America needs 4 more years of Donald Trump in the White House.”

The VP’s remarks were made just hours after the Senate voted to acquit Trump on both articles of impeachment that passed through the U.S. House. Pence’s visit in the state began on Wednesday morning at a West Philadelphia Catholic school alongside Secretary of Education Betsy DeVos, where they promoted school-choice programs. While Pence’s typical stump speech in the state usually just touts the Trump administration’s policies on trade and border security, school choice and targeting women voters were emphasized during the Wednesday evening “Women for Trump” rally.

“President Trump and this administration believe that every parent in America should have the right to choose where their children go to school, whether it’s public, private, parochial, or homeschool,” Pence said.

The topic of school choice took center stage at the State of the Union address on Tuesday evening when Trump announced that a fourth-grade student from Philadelphia who was attending the address in Washington D.C. with her mother was awarded with an “opportunity scholarship.” Echoing Trump’s address, Pence and DeVos singled out Gov. Tom Wolf (D) for his 2019 veto of a GOP backed bill that would have nearly doubled the Educational Improvement Tax Credit to $210 million annually, although Wolf later approved a $25 million increase in the state budget. 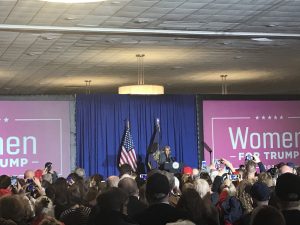 DeVos also accused Democrats of wanting to close all “charter schools” as well.

DeVos spent time criticizing the Democratic presidential hopefuls as “candidates trying to outsocialist one another,” and said that their plans for higher education “may sound nice” although she believes the outcomes would be “anything, but nice.”

In the last presidential election, Trump became the first Republican presidential candidate to carry Pennsylvania since 1988. While Republicans were riding high in 2016, they received a gut punch in the keystone state in 2018 with Democrats winning a number of seats at various levels of government. According to an NBC News exit poll, both Gov. Tom Wolf and Sen. Bob Casey, who coasted to double digit reelection victories, mainly had women to thank for their large margins with Wolf taking 65% of the women vote, while Casey carried 63% of the women vote, besting their GOP challengers by nearly 30% each.

Pence’s pitch to the majority women audience in Camp Hill was that the women were playing a significant role in the Trump economy.

“In this booming economy, women are leading the way,” Pence said. “Women are winning under the leadership of President Donald Trump and this economy.”

This is not the first time that the Trump reelection effort has held an event like this in the state. The Women for Trump national campaign kicked off in the Philadelphia suburbs in July 2019.

During 2019, Pence made several visits to the state promoting the USMCA trade pact, which was recently signed into law by Trump. The Vice President, who previously supported various free trade agreements, hailed the USMCA trade pact as success for Pennsylvanians.

“The days of NAFTA are over,” Pence said. “The USMCA is here.”

Pence spent roughly 7 minutes alone boasting about their administration’s positions of security, including foreign policy and a wall at the southern border, which resulted in “build the wall” chants.

At the conclusion of DeVos and Pence’s rally, the Pennsylvania Democratic Party released a statement slamming their education plans as “selling out Pennsylvania’s students for the benefit of special interests.”

“The Trump administration continues to hand massive tax cuts to the wealthiest and well-connected, while going after vital resources for everyday students,” said PA Democratic Party Chairwoman Nancy Patton Mills in a release. “Trump, Pence and DeVos have worked to gut public school funding, eliminate resources for low-income college students and have undermined programs that help survivors of sexual assault seek justice. Pennsylvania’s students and their families deserve better than Trump administration’s broken promises. Democrats will continue to fight for quality education for all children and work to make sure college is affordable for every American.”

While keeping Pennsylvania in the win column is critical to Trump’s reelection effort, multiple polls towards the end of 2019 showed Trump in a tight race in hypothetical head to head matchups with the Democratic presidential frontrunners.

A Morning Call/Muhlenberg College poll released in mid-November showed Trump trailing former Vice President Joe Biden by 9 points, and trailing both Sens. Elizabeth Warren and Bernie Sanders by 5 points in a hypothetical showdown in Pennsylvania. Earlier in November, a New York Times/Siena College polls showed Trump trailing Biden by 3 points among registered voters, behind Sanders by 1 point, and tied with Warren in Pennsylvania, although all results were within the margin of error. The most recent general election poll on the Real Clear Politics Average is from November.