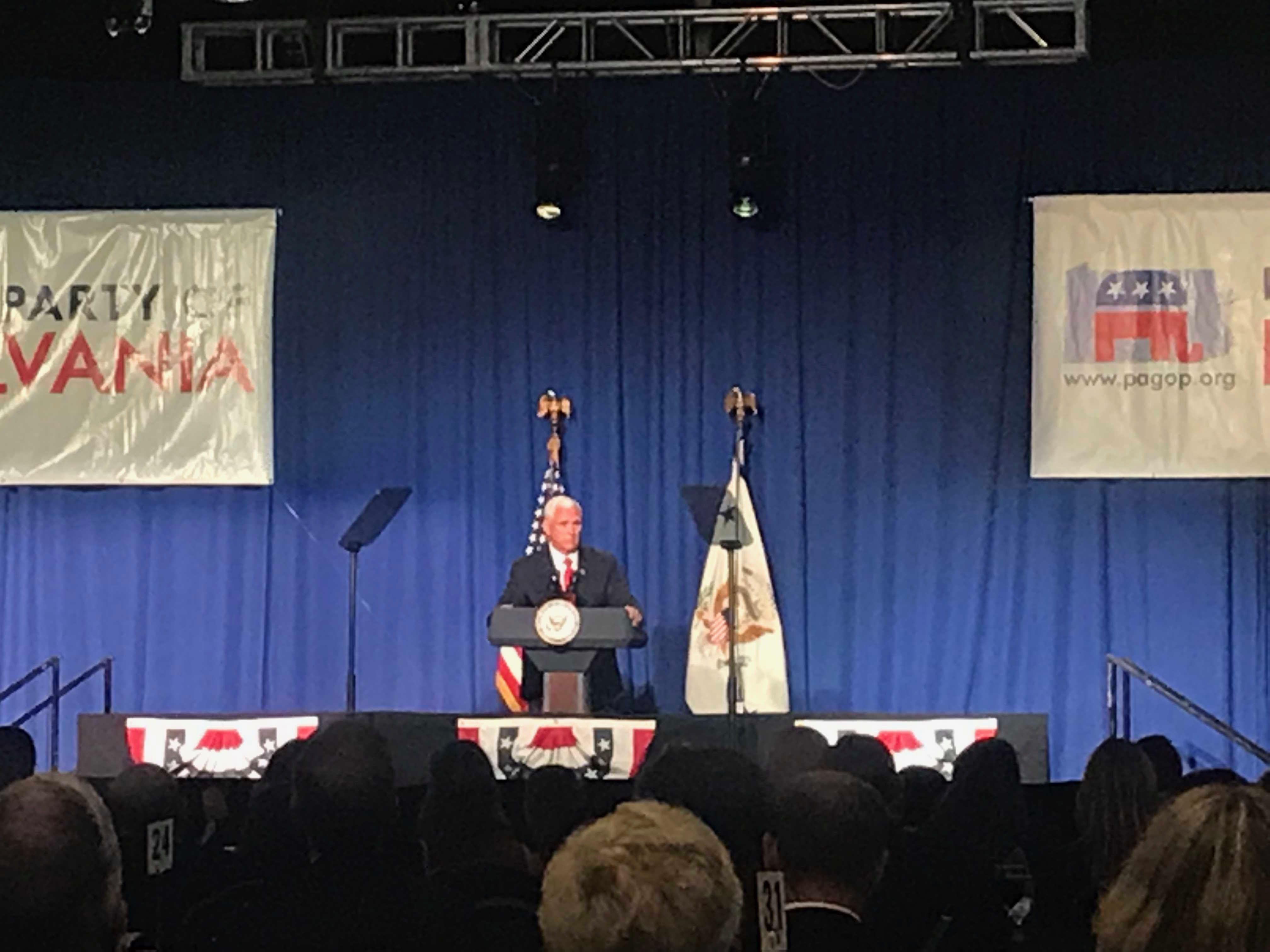 “I’m here for one reason and one reason only,” Pence said to the PAGOP dinner and fundraiser. “And that is Pennsylvania and America need four more years of President Donald Trump.”

The VP’s trip to south central PA included a tour at a manufacturing facility in York County with a few members of the state’s congressional delegation. The Trump re-election effort is playing up the administration’s push on combating free trade deals in the blue collar parts of the state.

Great to be at JLS Automation in York, PA this afternoon! The Keystone state exports more than $14 billion in goods & services to Canada and Mexico – and under the USMCA, that number will only grow – which will create even more jobs and opportunity for the people of Pennsylvania. pic.twitter.com/SJo6eAvaNq

The Trump administration still faces pushback from some in the GOP. Sen. Pat Toomey, whose sign was hanging up at the fundraiser, has voiced his opposition in recent months to the current form of the USMCA.

Unlike Trump’s address two weeks ago, Pence did not single out a 2020 Democratic hopeful, but instead delivered a shot at President Barack Obama, while boasting about the economy.

“Remember when President Obama was asked in 2016 about manufacturing in America?” Pence asked. “He said, ‘what magic wand do you have’, like we need a magic wand to bring it back, right.”

Outside of Pence making his Pennsylvania specific pitch to the GOP dinner, he also tapped into the more conservative positions the administration has advocated for thus far.

The VP praised former Congressman Lou Barletta, who was not in attendance, for his focus on illegal immigration “long before many people were” and said the wall was a necessity for national security.

Playing to the base, Pence likened the growing momentum in the Democratic Party of supporting late term abortions as them “embracing a culture of death”, while dubbing Trump the “most pro-life President in American history.”

Both state parties issued press releases prior to Pence’s arrival in the commonwealth.

The Pennsylvania Democratic Party attacked Trump and Pence for their “broken promises” to the workers of the state.

“Pennsylvanians are fed up with the Trump administration’s broken promises to our commonwealth, and a photo-op visit from Mike Pence can’t cover up their record,” said Brandon Cwalina, party spokesperson. “Our working families and local businesses shouldn’t have to pay the price for the Trump administration’s failed leadership, but their reckless policies are hurting workers and manufacturers across Pennsylvania.”

The Pennsylvania GOP warmly welcomed Pence’s speech at the fundraiser, lauding his leadership and the amount of money raised for the evening.

The PAGOP release said it was the most successful fundraiser in their history, a claim the party also made in September when Donald Trump Jr headlined the fall state committee dinner.

Pennsylvanians certainly have not seen the last of Trump, Pence or some of the 2020 Democratic hopefuls as the campaign heats up.

A recent Quinnipiac University poll shows that Pennsylvanians feel confident with the current state of the economy, but that is not translating to strong numbers for Trump. In hypothetical 2020 head to head matchups, Trump trails both former Vice President Joe Biden and Sen. Bernie Sanders outside of the margin of error.

At the recent Trump rally, PA GOP Chair Val DiGiorgio said he doesn’t take much stock in this polling and thinks with the current state of the economy that Trump will win the state again.

“I don’t know how much stock I’m putting in polling either way, whether we’re up or down,” DiGiorgio said. “In 2016, every poll had the President down, some by double digits with 2 weeks out from the election.”

“I don’t see how the President doesn’t carry PA,” he continued.

Also announced at the meeting was that Pennsylvania National Republican Committeeman Bob Asher and Christine Toretti will lead the 2020 Trump finance effort in Pennsylvania. Due to Pence’s late arrival, no other Pennsylvania Congressional representatives spoke at length at the dinner.