Pence Rallies the Faithful in Bucks 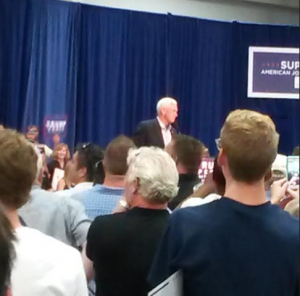 A couple of hundred Trump-Pence supporters turned out at a Worth and Company warehouse in Pipersville in order to see one half of their ticket.

GOP State Treasurer nominee Otto Voit was there to introduce the headliner, while retiring Congressman Mike Fitzpatrick could be seen milling about in the crowd.

As is the habit of campaigning politicians Pence was late, owing somewhat to his awkward haircut in Norristown. Ultimately, he was an hour late and although it was steamy in the AC-less building the crowd didn’t seem to mind.

“I’m a Christian, a conservative and a Republican in that order,” Pence began with his traditional self-introduction.

“When I got that call at 11:00 at night in the Governor’s Mansion in Indianapolis, I’ll tell you what I said yes in a heartbeat,” the VP nominee asserted.

Pence then went on to take some shots at the media, contending that we are, along with the Democratic Party and bureaucrats in D.C., waging war against Donald Trump.

“The party in power seems helpless to figure out our nominee, they really do and I’m talking about the media,” Pence stated. “It almost seems like it’s two on one, it feels like the media is doing half of Hillary Clinton’s work for her.”

This sparked one man to yell “That’s you guys!” at the media contingent in the back. This boisterous fellow then began interjecting “You tell ‘em, Mikey!” during Pence’s address. By the time the candidate was done, this guy had yelled some variation of that probably two dozen times.

The Trump-Pence team hasn’t been shy about throwing some invective the media’s way. All we got in response though were boos, rather than the colorful rants that have taken place at other Trump rallies.

During the roughly two hour gathering only one man sought out members of the media. He wanted to discuss some kind of treaty that Hillary Clinton was involved with and engaged in a long conversation with at least one member of the press.

Others were much more subtle, like the man in a “Hillary for Prison” T-shirt who nonchalantly leaned on the metal railing revealing the back part of his shirt said “The H is silent in Benghazi”. It only took a few seconds for someone to go up and ask him for his story.

Gov. Pence didn’t stay on the subject of the media for long as he transitioned to Hillary Clinton’s emails and the Clinton Foundation. He echoed the campaign’s call for a special prosecutor to look into the foundation.

He also gave a shout-out to Senator Pat Toomey when discussing the need for Trump and Pence to have a Republican Congress.

Calling Trump “one of the most successful negotiators on the planet Earth”, Pence pledged that they would improve America’s trade policy, a cornerstone of the GOP nominee’s platform.

Pence then moved to foreign policy, criticizing the record of President Obama and former Secretary of State Hillary Clinton. This culminated in the VP hopeful stating that it was Hillary Clinton “who left Americans in harm’s way in Benghazi”. This prompted someone to yell out “killed them!”. The crowd also chanted “Liar” when Pence brought up that the Administration initially believed the attack was prompted by an anti-Islamic video.

He also asserted that Clinton’s statement at a congressional hearing, when she asked what difference did it make as to what inspired the terrorists, was “disqualifying”.

The rest of the rally was filled with familiar refrains (“build that wall” was of course included) but there was particularly notable passage that stood out in Pence’s remarks.

“It seems like the politics of this country is always about division. It almost as though America has been reduced to a cable TV talk show,” he lamented. “Where every time there’s a conversation, it’s about what we differ on as opposed to what unites us.”

Given the fact that his ticket-mate was a TV star who’s made appearances and simulcasts on cable TV shows the core of his advertising effort, it’s tough to square the the two men’s philosophies.