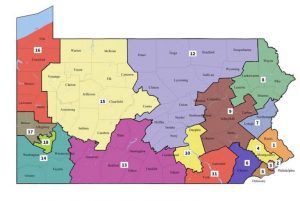 A lot has happened since we last looked at the congressional races in Pennsylvania on April 15, including a primary election, a stubborn coronavirus epidemic, and a widening lead in the state for Democratic presidential candidate Joe Biden. But in that time, the congressional race landscape hasn’t changed dramatically.

In PoliticsPA’s latest congressional vulnerability rankings – the sixth cycle in which we’ve made these rankings – we have increased the number of districts that are clearly vulnerable to a party takeover from three to four. In addition to Republican Scott Perry, Democrat Matt Cartwright, and Republican Brian Fitzpatrick, we have elevated Democrat Conor Lamb into the “vulnerable” category.

Perry is a four-term House member and Iraq War veteran who won by less than 3 points in 2018. He remains the most vulnerable incumbent on this list, facing a prize Democratic recruit, state auditor general Eugene DePasquale, who won the current district even as Donald Trump was winning it in 2016. But recent developments suggest that DePasquale isn’t on a glidepath to victory. He won the primary, but political newcomer Tom Brier, a 28-year-old attorney running as an outsider, won a non-trivial 40% of the vote. And when DePasquale released an internal poll taken in late May, it showed him trailing Perry, 50%-47%. DePasquale is keeping even with Perry in cash on hand – $985,000 for the challenger, compared with $991,000 for the incumbent – and the district’s media market isn’t too expensive. But the biggest factor in DePasquale’s corner right now may be Biden’s boomlet in the state.

Cartwright represents a district that supported Trump in 2016 by nine points, which led a bevy of Republicans to run in the primary to take him on. The heavily contested GOP primary may end up weakening the party’s chances of capturing the seat. The primary winner, with just 28%, was Jim Bognet, a former Trump administration official and onetime aide to former Sen. Rick Santorum and former Rep. Lou Barletta. After the primary, Bognet was left with just $279,000 in cash on hand – far below Cartwright’s $2.3 million. Meanwhile, Biden’s positive impact for Democrats could be even bigger in this district than it is elsewhere in the state, since the former vice president is a Scranton native.

Dueling polls show an unclear state of play in this swingy district near Philadelphia. If you believe the GOP polls, Fitzpatrick is up by double digits; if you believe the Democratic polls, he’s in a tight race. In 2018, Fitzpatrick was one of just three Republicans nationally to survive in a House district won by Hillary Clinton, thanks to his moderate profile and a weak Democratic challenger, Scott Wallace. Ivyland Borough Councilwoman Christina Finello, initially a backup choice of party officials, convincingly won the Democratic primary over Skylar Hurwitz, a Bernie Sanders supporter and tech company owner. Finello, a former senior official in the Bucks County Department of Housing and Human Services, is nowhere near as well known in the district as Fitzpatrick, who succeeded his brother Mike in the congressional seat. And in the money race, which would be key to broadening her name identification in an expensive media market, Finello is far behind, with just $296,000 on hand compared to Fitzpatrick’s $1.8 million. Fitzpatrick’s record of independence among House Republicans gives him a potential path to victory, but the Philadelphia region, like many metro areas, has been trending Democratic, and Finello has sought to tie him to Trump. Biden’s surge only raises the temperature for the incumbent, despite his bigger warchest.

This race represents the biggest change on our list, moving up a notch and shifting from “potentially vulnerable” to “vulnerable.” Lamb gained national attention by winning a strongly Republican district in southwestern Pennsylvania in a 2018 special election, then by ousting Republican Rep. Keith Rothfus in November in a redrawn district that was more favorable to the Democrats. But the GOP recruited former Army Ranger and author Sean Parnell, a frequent Fox News guest who’s received Trump’s backing. Parnell is seeking to tie Lamb to national Democrats who would like to curb energy development; that’s a potent issue in blue-collar portions of the district. But Lamb has worked to broker a middle-ground approach on energy as part of a Biden-Sanders unity platform committee, which could play well with the more suburban, blue-trending parts of the district. However, the biggest reason we moved the race up a notch is that Parnell outraised Lamb in the 2nd quarter, $717,000 to $441,000, which is a notable achievement for any challenger to an incumbent. Lamb still had $1.3 million in cash on hand at the end of June, which was more than Parnell’s $869,000. But if this dynamic continues, this contest could eventually move further up our rankings.

Wild, who won an open seat in this competitive district in 2018, faces Lisa Scheller, a businesswoman and Lehigh County Commission chair who narrowly won her primary over former Lehigh County commissioner Dean Browning. Scheller is a conservative who runs a family manufacturing business; she’s also a former heroin addict who’s been in recovery for almost four decades. But Scheller could have trouble catching up to Wild in the fundraising race – Wild had more than $2 million in the bank at the end of June – and Biden’s surge should be helpful to the incumbent. We’ll wait to see if this develops into a breakout race.

In a surprisingly competitive race in 2018, Kelly held off Democrat Ron DiNicola by about 4 points, even though Trump won the district in 2016 by 20 points. Kelly has a history of controversial comments and could be vulnerable, but the Democrats have an untested nominee in teacher and cancer survivor Kristy Gnibus. At the end of June, Kelly has a more than 10-to-1 cash advantage over Gnibus, $1 million to $58,000, and Gnibus can’t even chalk up that shortfall to primary spending, since she was unopposed. Even in a media market as cheap as Erie’s, that’s a huge obstacle. An internal poll from Gnibus showed her trailing Kelly, 48%-40%. Her best hope comes from a different finding in the poll – that Biden trails by just 4 points in the district, a far better showing than Hillary Clinton in 2016.

Smucker reported having just $481,000 in the bank at the end of June, barely any higher than it was six months earlier, and that isn’t much for an incumbent in any case. But his opponent, Sarah Hammond, has barely over $2,000 on hand, and she’s coming off losses for state House in 2018 and state Senate in 2019. It’s also a heavily Trump district. Hammond will need lightning to strike.