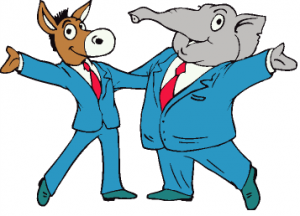 The role of a county party chair is complex and often thankless. He or she must be an organizer, diplomat, activist, spokesperson, recruiter, fundraiser, and executive.

Many of the 134 Democratic and Republican chairs around Pa. excel, but a few stand out above the rest. We talked to politicos pros, party activists and you.

The criteria for the list are somewhat subjective. Some people are on this list because of their standout work during 2012 elections, some for their strong fundraising, others who brought peace to a previously divided county.

The thing they have in common is that they are regarded as the best by local and statewide politicos, candidates, and PoliticsPA readers who offered their input for this piece.

You can compare them to last year’s list here.

Groen is the best county chair of either party in the entire state because he combines it all: fundraising, organizing, candidate development and more. Groen is a prominent attorney in the region and has been Chair of the MCDC for 19 years. In that time, the county went from near total GOP control to near total Dem control, including the first Dem majority on the Board of Commissioners ever. The party ousted Rep. Quigley in November, the only GOP incumbent in Pa. to lose on election day, with little financial help from Harrisburg. Plus Montco went big for Obama in 2012, all of which is a credit to Groen’s professionalism. Whenever Chairman Jim Burn steps away from the helm of the PA Dems, expect Groen to take his place.

We can’t say it better than this Inky profile piece. Congressman Brady is the consummate party boss and ward leader. It’s rare that anyone in the Democratic city challenges him comes out on top. Philly’s margin in 2012 carried the President in Pa., but more importantly stood as a bulwark against a GOP surge, which in turn allowed Obama’s campaign to spend its resources in other close states.

He comes well recommended by statewide Democratic campaigns and groups because his work ethic is significantly stronger than his ego; he’s willing to to do what it takes. His effort was rewarded by excellent performances up and down the ballot in 2012, including a state Senate pickup. Plus, he’s a press whiz – very skilled at hyping Dem events in the city by the lake.

Before Auditor General Eugene DePasquale won in November, can anyone name the last York County Dem elected statewide? Gov. George Leader in 1954. DePasquale a gem in Kefauver’s cap. He leads the party in a county that is poised to grow more favorable for Democrats over the next decade. And he’s forward-thinking; he uses voter date more effectively than any other chair, one recommender said.

Landau is an up-and-comer in SEPA Dem politics and well regarded by statewide campaigners. Good at candidate recruitment, he found his feet since mid-2010 when he started. Now he takes an active role in the management of campaigns in his county. And Delco was one of just 3 Pa. counties where Obama actually did better in 2012 than 2008.

She’s relatively new, but it hasn’t taken her long to modernize and professionalize the party in Pa.’s second biggest county. A strong ally of County Exec Rich Fitzgerald, she’s done a good job uniting the sometimes fractious Allegheny Dems. Her warm demeanor has boosted her work to connect with the rank and file of the party.

A longtime grassroots leader, she took charge of the committee a few years ago – with big shoes to fill as the first non-Gleason in decades. Under her leadership the party made inroads in every local and federal race, including keeping it close enough with Mark Critz to give Keith Rothfus a chance. It’s to the party’s great detriment that Wilson had to step down after the election for health reasons.

Keep an eye on DiGiorgio. Many Republican insiders put him at the top of their list of potential future state party Chairs because he’s adeptly shown how to raise money (over $1M for the Chesco GOP, said one nominator) as well as canvass. Every incumbent GOPer won re-election last cycle including several highly targeted ones. And Chester was the only southeast Pa. county to go for Romney (Obama won it by 10% in 2008) thanks in part to the party’s grassroots organizing; they were repeatedly ranked nationally by the Romney campaign for hitting outreach goals. He’s been chair since October 2011.

Kerr gets the up-and-comer award for his efforts to make the Northampton GOP a significant player. When he took charge in January 2012, the party was outdated and divided. Since then grassroots organizing, fundraising, and member participation have all increased. He’s not afraid to get his hands dirty and phonebank. He was recommended by several of the politicos who worked with all 67 chairs in 2012.

The longtime de facto Chair under Harry Fawkes, Poprik knows the committee and its members top to bottom. Her party easily held onto county offices in 2011 and defended Rep. Mike Fitzpatrick with ease in 2012. The County was a glimmer of hope for Republicans in the waning hours of the presidential election as Romney rallied  35,000 supporters in Bucks – with the committee’s on-the-ground logistical support. The GOP deficit shrank by 23K from 2008 to 2012 and although Obama scored a win with 50.0% of the vote, Bucks was the only SEPA county where he did worse than John Kerry in 2004.

There are few places in the country where GOP machine politics survives, and Delco is one of them. Reilly holds the reins of a powerful local operation whose muscle shows in its dominance of local campaigns (though not presidential ones). He can raise money, too.

Pittsburgh has become a main stop for national Republican candidates and speakers and Allegheny is the biggest GOP county in Pa. Roddey, the former County Executive and one of the most influential members of the state party, is a big reason why. Plus, Keith Rothfus’s relatively strong performance there helped deliver the PAGOP’s single sweetest 2012 win.

Local Republicans who might be inclined to support a tax increase have learned a lesson: don’t. The vocal, organized and firm party leader has taken an active interest in purging his party of those who are insufficiently conservative, and he’s done a solid job of it. As a result Woodman has helped elect a solid GOP majority in Lehigh County government. Given his background in financial services, it’s no surprise that he’s a solid fundraiser, too.