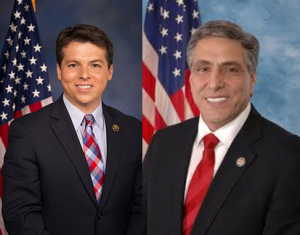 Yesterday afternoon, the U.S. House passed the American Health Care Act, and immediately Pennsylvania’s elected officials were pushing their statements on the bill.

Republicans are portraying the bill as a promise kept while protecting those with pre-existing conditions, while Democrats are pushing that the bill will take away healthcare from millions of Americans.

PoliticsPA is giving the ‘party warrior award’ to Rep. Brendan Boyle (D-Philadelphia) and Rep. Lou Barletta (R-Luzerne) for most strongly articulating the party line.  Boyle blasted the bill repeatedly in his statement, while Barletta defended the GOP’s view on the bill.

The ‘temperance award’ goes to Rep. Charlie Dent (R-Lehigh) for coming out against the bill and sticking to his view, and Rep. Matt Cartwright (D-Lackawanna) for opening the door to working with Republicans to fix healthcare in the country.

Below are the highlights from each statement that was released from elected officials.  PoliticsPA will update with additional statements as we receive them.

“This is a sad day for millions of Pennsylvania families who now continue to worry about their access to health care. I will continue to fight to save health care access and consumer protections that help protect the health and financial security of Pennsylvanians. While some in Washington are celebrating today as a victory, this shallow and shameful attempt to score political points at the expense of the sick, poor, elderly and disabled will not soon be forgotten. I thank the Republicans and Democrats who voted ‘no’ today. We can only hope that the United States Senate cares more about the people they were elected to serve.”

“Republicans in the House of Representatives just delivered an economic punch to the gut of middle class families in Pennsylvania. What passed today isn’t a health care bill, but a scheme to cut taxes for millionaires and big corporations, a giveaway for special interests, and forces middle class families in Pennsylvania to pay more for their health care. This will throw Pennsylvanians with pre-existing conditions into a high-risk pool, forcing them to pay thousands of dollars more for coverage, impose an “age tax” on older Americans, and leave individuals with disabilities out in the cold – possibly without even the security of Medicaid coverage.”

“The numbers don’t lie. According to the Congressional Budget Office (CBO) score last month,  24 million Americans stand to lose their health coverage under the AHCA.  There is no doubt that this horrendous bill will put undue stress and burden on the American people nationwide, who will be the ones forced to pay more for less coverage.”

“After exhaustive review, I have made sure that this bill fully protects patients with pre-existing conditions by strengthening current law and establishing new requirements for states to follow as they redesign their markets to meet their populations’ needs. I would not support this bill or any other bill if such strict protections were not included.”

“While it’s important to recognize the American Health Care Act (AHCA) does not repeal the Affordable Care Act in full, it is a first step, albeit an imperfect one. Recent changes in the AHCA will give states more flexibility to tailor health care policies to meet the specific needs of its citizens and help reduce premium costs over time, while explicitly maintaining protections for those with pre-existing conditions.”

“Leadership acted in good faith and continued making important changes to the bill. With these changes and today’s vote I am optimistic that we can continue through the legislative process and deliver a healthcare reform bill to the President’s desk.”

“I pledged to my constituents that protections for those with pre-existing conditions without contingency and affordable access to coverage were benchmarks that needed to be satisfied. I cast a no vote on the legislation today, but as I continue to hear from constituents, doctors, nurses, and healthcare providers about their problematic experiences with the current system, I remain committed to healthcare reform.”

“I’ve said from the start: ‘We need to proceed in fixing our healthcare system in a responsible, deliberate manner. That means any changes to our current system must ensure both the continuity of coverage and the continuity of patient protection provisions.’ Throughout this debate, I’ve made clear my concerns about the proposed legislation – including its impact on our response to the opioid epidemic crushing our community, something I’ve made a primary focus in Congress. Despite some positive portions, I could not support this bill with these issues unresolved.”

“This bill includes a number of important protections for patients and taxpayers. No person can ever be denied insurance coverage because of a pre-existing condition. Period. Young people will be able to stay on their plans until they are 26. And instead of tax dollars being sent to Planned Parenthood, the largest abortion provider in the country, these tax dollars are redirected to community health centers which outnumber Planned Parenthood centers 8 to 1 in Pennsylvania.”

“As a three time cancer survivor, and the father of someone living with Cystic Fibrosis, I am proud to vote for a bill that continues to protect the most vulnerable Americans. The AHCA ensures no one can be denied coverage based on pre-existing conditions, and prohibits lifetime limits on coverage. Additionally, the ACHA provides states with $100 billion to design programs that meet the unique needs of their patient populations and provides an additional $15 billion for mental health and substance abuse disorders.”

“Despite false assertions, this bill retains the policy that nobody can be denied coverage based on a pre-existing condition and includes multiple layers of protections to maintain affordable costs for these individuals.”

“The American Health Care Act is a solution that addresses both coverage for those with pre-existing conditions and affordability for everyone, with states having an opportunity to move away from Washington mandates and towards flexibility and choice.”

“This reincarnated version of Trumpcare was even worse than the bill House Republicans walked back on March 24.  To appease their most extreme wing, they made coverage for pre-existing conditions optional for states while at the same time making repeated promises to the contrary to the American people.  If enacted, this bill will drive up costs, eviscerate the essential health benefits and protections for pre-existing conditions protected by the Affordable Care Act for millions of Americans and eviscerate Medicaid, which covers our most vulnerable – all the while taxing older Americans and providing massive tax breaks to the super rich.”

“Today we all get a chance to go on record about where we stand on this shameful, cruel bill. This creates a survival of the fittest health care for America. If you are young, if you are healthy, if you are wealthy, this bill’s for you; you’re going to do okay. But woe, if you are old, if you are sick, if you are poor, there’s no coverage in this bill for you. If you’ve got a young child with cancer, guess what? Those benefits aren’t going to be paid. The American people will remember how you voted on this bill today”

“I am disappointed that the House passed this bill which I believe will increase health insurance costs – particularly for low-to-moderate income Americans, increase the number of uninsured by up to as many as 24 million people, and undermine important protections for those living with pre-existing conditions. It is my hope that cooler heads will prevail in the Senate and that they will produce a better bill that is focused on improving healthcare for all Americans rather than the haphazardly constructed and hastily considered House bill.”

“The American Health Care Act will help ensure Pennsylvanians have access to the care they need at a price they can afford. It returns regulatory power to the states – where it belongs – so that governors can run state-specific programs instead of a top-down, one-size-fits-all approach. It ends Obamacare’s costly mandates and provides both a market-driven system that will lower premiums, and tax relief to hardworking Americans to help make health care affordable. Finally, the bill provides protections for those with pre-existing conditions.”

“Americans with pre-existing conditions would be denied health coverage or forced to pay higher premiums. And Americans between the ages of 50-64 will pay premiums five times higher than what others pay for health coverage under the replacement bill.  That’s thousands of additional dollars annually. Instead of enacting this ill-advised legislation, Democrats and Republicans should work together to improve the Affordable Care Act.”

“I am disappointed that none of my Democratic colleagues stepped forward to work with us towards a solution and ignored the thousands of families who called on Congress to rescue them from this failing law. However, as we move forward, I will continue to work tirelessly to ensure we deliver relief and reform our nation’s broken health care system.”