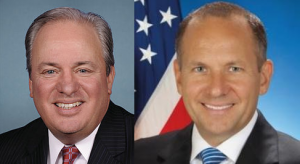 House Republicans released their plan to repeal and replace the Affordable Care Act and almost immediately Pennsylvania’s elected officials put their spin on it.

Republicans have mainly been touting the plan as a way to lower healthcare costs.  Democrats have been calling the plan failed and that it will hurt people’s access to healthcare.

PoliticsPA is the awarding the ‘party warrior award’ to Democratic Rep. Mike Doyle for having one of the strongest statements against the American Health Care Act, and Republican Rep. Lloyd Smucker for his praise of the AHCA.

Below are the highlights from each statement that was released. PoliticsPA will update with additional statements as we receive them.

“For seven years, Republicans in Washington criticized the Obama Administration for rushing Obamacare through without the appropriate public vetting and yet Americans are being given less than seven days to fully understand the implications of this legislation on their health and households.”

“GOP health plan’s proposal on Medicaid is a disgrace to our nation and I will fight it with everything I have.  This would mean cuts for seniors, those with disabilities and those with low incomes. Hell no, I won’t go along with it.”

“We have seen real numbers, heard countless success stories and have hard facts to prove the ACA provides quality, affordable health insurance to millions of Americans. In the African American community we have seen the uninsured rate decrease dramatically as a result of the ACA. Now, is not the time to repeal and replace a law that is working with a plan that will cost Americans more money for less coverage.”

“The end of Obamacare and the start of a better health care system began this morning and will continue until cost-lowering, patient-centered health care for every American is fully achieved. This is news of enormous relief for American workers, families, seniors, those who are sick and vulnerable, and those who give them medical care.”

“I was encouraged to see that the bill maintains that people with pre-existing conditions cannot be denied coverage, and that adult children can stay on their parent’s health insurance until the age of 26. The bill also fully repeals the job-killing medical device tax and makes significant strides in rolling back harmful government mandates. I am continuing to review the bill, keeping in mind the impact it will have on people of Pennsylvania’s 11th District.”

“As a co-chair of the Blue Collar Caucus, I am particularly incensed that Republicans used this bill as a means to dump huge health costs on working families while at the same time handing the 400 wealthiest families in America a tax break worth $7 million a year.”

“For seven years you have promised the american people you are going to repeal and replace Obamacare.  And this is what you come up with.  This is a bad joke.  No wonder you have been hiding dog in a cave with an armed guard until Monday night.”

“While more work needs to be done, the American Health Care Act is a good start to ensuring Pennsylvanians will have access to the care they need at a price they can afford. I will work with my colleagues in the House to advance this critical legislation, and will fight for a stable transition to a better system for everyone.”

“The American Health Care Act reflects our commitment to deliver treatment before tragedy.”