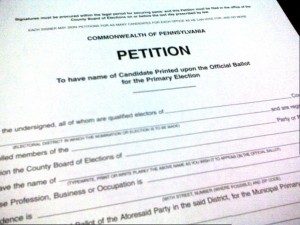 Petition season is here, which means politicos from across the state are braving the cold and knocking on doors, hitting the pancake breakfast circuit, and sometimes bringing clipboards to social events.

The process is deceptively difficult and a technicality can mean the difference between being on the ballot, or watching from the sidelines. It’s a demonstration of operational strength – or weakness.

You can get petitions here, and the full state guidelines can be found here. Read them closely, because opponents scrutinize every page to make sure I’s are dotted and T’s are crossed. And while state courts have trended in a more lenient direction lately (eg. accepting common nicknames in lieu of full names), no candidate wants their campaign to come down to a judge’s whim.

PoliticsPA decided to reach out to politicos across the state to get best practices, and hear the horror stories and the fun anecdotes about this three week span.

From all across the spectrum, the tips came rolling in.

The most common piece of advice: Don’t forge signatures.

Here are some of the other top tips from veterans of the process:

PoliticsPA asked for the fun and not so fun stories from petition circulation, some gave permission to use their names, others were submitted anonymously:

If you have a petition tip or anecdote we missed, email paul@politicspa.com to submit them anonymously or on the record.

“I once had to get an insurance estimate after my car was hit, and the woman who performed the estimate just happened to live in the district we were collecting signatures in! I left the insurance office with more signatures than I walked in with thanks to the clipboard in my backseat”.

We have encountered all kinds of situations regardless to the extent of training and direction offered including:

“A State House candidate and his campaign aide were out collecting signatures and had a great conversation with a couple.  The couple told the candidate that they were hosting a bible study that night and the people involved would sign the petitions.  They obviously came back to the group, spoke with them all and got their signatures.  Before the candidate and staffer had a chance to leave, the bible study started, which as it turned out was a video series.  After about 20 minutes, the candidate and staffer could not find a socially acceptable time to leave.  The staffer decided to jump out of his seat, wave his arms and shout for the video to the stopped. ‘I believe everything you believe,’ he told the church group, ‘but we gotta go!’  And then they simply left.”

“Sometimes the wildlife in the district does not like the candidate.  A State House candidate was walking between houses a goose walked up to the candidate and relieved himself on the candidate’s shoe.”

“Everyone always complains about the weather during petition circulation, but sometimes going door to door has its perks.  A candidate and his staffer were out knocking on doors for petition signatures in the northern part of the state when the candidate realized he couldn’t find his staffer.  He then saw his staffer lean out of a house and wave him over.  The homeowner had invited the staffer in for a beer and to get out of the cold.”