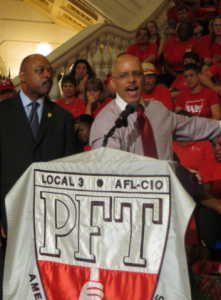 Leaders from the Philadelphia Federation of Teachers traveled to Harrisburg today to advocate the need for sustainable funding in the state’s public schools.

In light of the looming budget deadline, they need action to take place quickly, or they will need to wait another year to see additional funding for their schools.

“Pennsylvania is one of three states without a funding formula for education,” said PFT president Jerry Jordan while petitioning in the Capitol. “The result has been massive budget cuts and huge deficits for school districts like Philadelphia, where students don’t have enough counselors, school nurses, certified librarians and other programs and services.”

In PA, schools are funded mostly via local property taxes, often leading low-income communities’ public schools to be significantly under-funded in comparison to those of wealthier districts. The funding formula Jordan mentions would ensure that more state dollars would go to communities with lower local funding, thereby leveling the playing field and providing all schools with the same funding.

The state legislature instituted such a formula in 2008 during Gov. Ed Rendell’s tenure, but the legislation was reversed in 2011 after Gov. Tom Corbett was elected to office.

The PFT leaders spent the morning in face-to-face meetings with legislators, followed by an afternoon rally and press conference in the Rotunda. They were joined by PA Representatives Cherelle Parker, James Roebuck, Louise Williams Bishop, Ronald Waters and Steven Kinsey and State Senator Vincent Hughes.

They also voiced their opposition of several pieces of legislation while at the Capitol, including the proposed reformation of PA’s current layoff-by-seniority rules and the Corbett-Tobash pension plan.

“Not only will these pieces of legislation hurt working Pennsylvanians,” Jordan stated, “they are a needless distraction from what should be the primary focus of the legislature—passing a budget that keeps school districts out of crisis mode and helps to guarantee a better future for our children.”