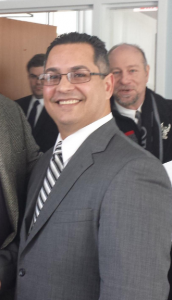 Facebook posts have a Philly Council hopeful in hot water.

“Anything that you find from my Facebook that has to do with any type of derogatory comments, has never been from me,” Emanuel “Manny” Morales said.

The posts in question range from 2010 to 2014. Morales supplied no other explanation for how the messages appeared other than to say that people get hacked. The page was taken down on Monday. This came after he made one final post to address the situation.

U.S. Rep. Robert Brady, the party chairman, said he will call on an expert to get the facts and determine what happened.

“We have a process to go through to find out everything that happened; we’re not through the process yet,” Brady said.

“From what I understand, he has denied everything. I’m going to have a forensic expert, Facebook expert, look at it. I’m not rushing to judge. We’ll see what happens.”

Mayor Nutter also weighed in on the situation via his Facebook page.

“If these materials were, in fact, not posted by Mr. Morales or connected to him in any way, he needs to refute them and explain how they became connected to his candidacy to the citizens of this city,” Nutter wrote.

“As a citizen, I am offended by his comments. As an African American, I am deeply insulted. And as Mayor and an active Ward Leader in the Democratic City Committee, I am repulsed by the kind of views that Mr. Morales apparently expresses on his personal social media accounts,” Nutter said.

“Since it appears that the posts were made by Mr. Morales on his personal social media account, I am hopeful that he will do the decent thing and withdraw as a candidate in this race . . ..,” Nutter wrote. “His views are in complete conflict with Democratic Party values. They represent the thoughts of a racist and a bigot.”

The allegations surfaced on Monday when Councilwoman Maria Quiñones Sánchez screen-grabbed over 60 questionable posts which she then published on a site she controls, www.meetmannymorales.com.

“I’m not leaving the race and we will win on May 19,” Morales said. “I’ve actually been getting a lot of support – she’s [Sánchez] being a good campaign manager.”

“It is shameful that Mr. Morales appears to have presented such a deceptive picture of his views and values,” Williams said.

“I hope that the party will take this new information under advisement and reconsider their endorsement.”