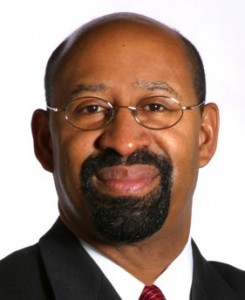 The Pew Charitable Trusts has been taking periodic polls of Philadelphians to see what they think of city government and to rate the job performance of 2nd term mayor, Michael Nutter.

The poll that was commissioned is called the Philadelphia Research Initiative and it is a telephone survey that was conducted over a two week period among a random sample of 1600 Philadelphia residents. It  provides timely, impartial research and analysis on key issues facing Philadelphia for the benefit of the city’s citizens and leaders.

The results of the poll give an idea of how Philadelphians think Mayor Nutter is performing and the direction that they see the city headed in. Over the past year Mayor Nutter’s approval rate has increased, but residents are concerned about the rise of violent crime in Philadelphia.

Nutter’s approval rating is at the highest it has been since the Philadelphia Research Initiative began four years ago. 60 percent of city residents now approve of the Mayor’s performance and 30 percent disapprove, up from 52 percent approving and 37 percent disapproving a year ago.

The most significant gain has been among the approvals from African Americans at 52 percent, up from 42 percent in the last poll. Whites and Hispanics approvals of Nutter for this year’s poll are at 69 percent and 55 percent, respectively.

Here are some of the highlights of the poll:

The largest concern among city residents was crime. From a list of top priorities for the city of Philadelphia, pollsters chose reducing violent crime 85 percent of the time. The number of people who feel safe in their home at night fell 8 points to 37 percent. Also 74 percent say that crime is a “serious” or “very serious” problem in their neighborhoods, up from 64 percent.

53% of households report experiencing unemployment in the past year, a 1 point increase. In addition, 81 percent of residents believe that the lack of job opportunities are a “serious” or “very serious” problem.

52% of residents are optimistic that their personal financial situation will improve over the next year, which is the same level of optimism expressed in the previous two years’ polls.

Another interesting statistic is that 39 percent of city residents believe Philadelphia is headed in the right direction, while 42 percent say it is on the wrong track. There is an overall sense of optimism for the city, with 59 percent of citizens believing the city will be better in 5 years.

It is interesting to see the 8 point increase in Mayor Nutter’s approval ratings with issues such as violent crime and unemployment plaguing the city.

Last year alone the city saw 324 murders, up from 306 in 2010. City officials believe that it is too early to tell whether the homicide rate will continue to rise in 2012.

The Philadelphia metropolitan area also has the 6th highest unemployment rate among  the largest U.S. metropolises according to the Bureau of Labor Statistics. The city’s 2011 unemployment rate is estimated to be around 10.5 percent which is largely unchanged from the 2010 data.