In Philly Controller Race, Mandel is First on TV (With Video)

Challenger Brett Mandel is the first candidate on the air in Philadelphia. His campaign is on television with a split positive/negative spot in the Democratic primary for City Controller.

The 30-second commercial, which is airing on cable TV throughout Philadelphia, begins by attacking incumbent Alan Butkovitz for Philadelphia’s “school funding mess,” pinning the school district’s $300 million deficit on his opponent.

The tone quickly turns, however, with the cue of a piano chord and Mandel’s promise to secure more state funding for Philadelphia schools. 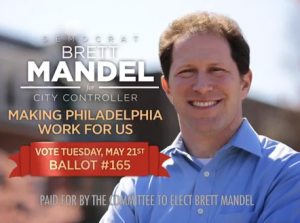 “Brett Mandel is the only Democrat who fill fight to get Philadelphia schools the funding they need, making Philadelphia work for us.”

The spot was produced by Philly-based Bronstein & Weaver.

Curtis Blessing, a spokesman for the Butkovitz campaign, called the ad “dishonest and misleading.”

He pointed to a WHYY Newsworks report which said in part, “suggesting that Butkovitz is to blame for school closings is, well, silly.”

“We’ve gotten a response from several groups who are upset about this ad,” Blessing said, citing progressive and African American organizations.

“It’s a small media buy in a big city. It’s less than a typical state House candidate would do,” Blessing charged. He declined to comment on his own campaign’s plans – or lack thereof – for a television buy in, but did note the expense.

Mandel campaign manager Dan Siegel declined to comment on how much was spent on the ad. Philadelphia’s media market is expensive, and this is the first TV ad released by either candidate in the controller race.

Attorney Mark Zecca is also competing for the Democratic nomination.