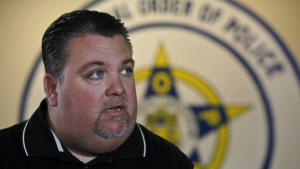 The Philly chapter of the Fraternal Order of Police (FOP) is supporting Donald Trump for President.

According to Mark Dent of BillyPenn, union President John McNesby confirmed that their chapter is included in the national endorsement that the FOP gave to Trump.

“Mr. Trump has seriously looked at the issues facing law enforcement today. He understands and supports our priorities and our members believe he will make America safe again,” said FOP national President Chuck Canterbury. “He’s made a real commitment to America’s law enforcement and we’re proud to make a commitment to him and his campaign by endorsing his candidacy today.”
As Dent notes, the FOP hasn’t endorsed the Democratic nominee for President since 1996. The Philadelphia chapter did, however, formally back the Dems AG nominee Josh Shapiro.

McNesby was critical of both Clinton and the Black Lives Matter movement in the days leading up to the Democratic National Convention.