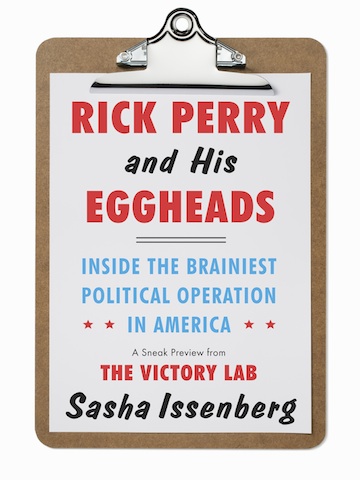 It was initially intended to be just a chapter. But when it became clear that Texas Governor Rick Perry was planning a run for President, former Philadelphia Weekly scribe Sasha Issenberg got a call from his publisher.

“Crown decided to do something unprecedented itself, making available a sneak preview of a book still in progress,” wrote Issenberg in an email announcing his book.  “I spent a few days recasting the chapter, to ensure that it could stand on its own and adding material to bring its narrative up to the present.”

In Philly, Issenberg penned this delicious take-down of columnist David Brooks. He’s also written for the Boston Globe, New York Times, and has a few other titles under his belt.

“Rick Perry and His Eggheads: Inside the Brainiest Political Operation in America,” examines his 2006 re-election campaign and how his top political adviser, Dave Carney, convinced him to allow four Yale social scientists conduct real-time experiments to study what makes people vote.

Issenberg says the book is a quick read – about as long as a thorough magazine article. One, “that I think will change the way you see Perry, his political milieu, and the world of campaigns in general.”

During an interview with the New York Times, Issenberg stated that “no candidate has ever presided over a political operation so skeptical about the effectiveness of basic campaign tools and so committed to using social-science methods to rigorously test them.”

Although according to Issenberg some people perceive Perry as “a cartoonist cowboy anti-intellectualist,” Perry and his “eggheads” show how the combination of political science and thinking outside the box sparked a game-changing trend in campaign politics.

“It came out yesterday, and is already the 5th best-selling political title, in print or digital formats, at Amazon,” Issenberg boasted in a light-hearted email yesterday. “By way of comparison, I’ll note smugly, Perry’s own “Fed Up!” is 14th. (For what it’s worth, “The Marx-Engels Reader” is 13th.).”