Voters wanted to talk to Gov. Tom Corbett about education and welfare funding, Voter ID and the reason why he was in Philadelphia in the first place, Marcellus Shale drilling.

But several attendees didn’t ask questions so much as they yelled, loudly and for minutes on end, turning what was supposed to be a 90-minute town-hall meeting Wednesday into a 60-minute debacle for all involved. 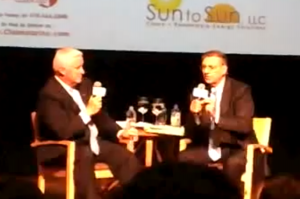 The meeting, which took place at the Philadelphia Museum of Art and was hosted by conservative talk-radio host Dom Giordano of 1210 WPHT, started calmly enough as a back-and-forth between the Giordano and the Governor, but soon disintegrated into chaos.

According to Philadelphia Inquirer’s Robert Moran, Corbett eventually was unable to speak without being shouted at.

Police had to remove several people from the meeting, and other ticket-holders standing outside were denied entry less they add to the chaos.

Corbett, who remained notably calm, dealt with the protesters for about an hour. Eventually, though, Giordano made the decision to end the town hall early and the Governor was booed as he left the auditorium.

It is well-publicized by the Dems that Corbett has suffered from sagging poll numbers for the last several months – and particularly so in the Philadelphia area.

They were on hand for the meeting and provided the above video. Although they were not responsible for the protesters, they are more than happy to talk about it.

The protesters begin shouting around 13:20 and continue for several minutes.