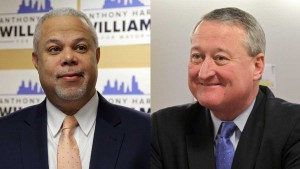 It appears that their publications aren’t actually thrilled with the field of candidates either.

The Inquirer titled their piece “Williams, narrowly” while Philly Mag went with “The (New) Jim Kenney for Mayor”.

The first editorial seemed more focused on convincing readers of the dangers of union leader John Dougherty, who is backing ex-Councilman Jim Kenney, than the virtues of State Senator Anthony Williams.

“The more than 40 labor organizations backing Kenney include John J. Dougherty’s powerful electricians’ union – which already wields significant sway over Council to the detriment of the city – as well as the public employee unions he would face at the bargaining table,” the board writes.

“For two men representing different facets of the city – the passionate Irish Catholic son of a firefighter from East Passyunk; the even-keeled son of an African American politician from Cobbs Creek – they are a remarkably close match,” they said of Kenney and Williams. “But the balance of power in City Hall isn’t so close. Because the unions backing Kenney already wield too much influence, The Inquirer’s choice for the Democratic nomination is ANTHONY WILLIAMS.”

Controversy instantly arose as Kenney supporters pointed out that the owner of the Inquirer, H.F. “Gerry” Lenfest gave $2,900 to a pro-Williams PAC in 2013.

Additionally, Dave Davies of WHYY is reporting that the paper’s editorial board reached a consensus to endorse Kenney. The paper’s editor, however, told Davies that he was the one who overruled the board, not Lenfest.

“The decision was mine, and Gerry had nothing to do with it,” editor Bill Marimow said.

Marimow explains that he decided to take on the assignment after the fallout from Lenfest’s decision not to endorse a candidate in last year’s Governor’s race.

At the time, the move was viewed as a surprise since most papers were supporting Wolf and Philadelphia is undoubtedly the most Democratic city in the state.

Lenfest and his partner Lewis Katz seized full control of the company about a year ago but Katz died just days after in a plane crash.

Philly Mag meanwhile, are happy to back Jim Kenney, just so long as he is the right Jim Kenney.

Apparently, they feel that over the course of his career there have been two different Jim Kenneys.

“The first Jim Kenney — let’s call him Original Recipe Jim — was your standard-issue Philly pol, a rowhouse guy reared at the knee of Vince Fumo,” they write. “Original Recipe Jim was smart enough — and he had a candor that could make him kind of hilarious — but he also seemed combative and parochial and more interested in protecting The System than in helping Philadelphia progress.”

“In recent years, though, a second Jim Kenney emerged,” the editorial continued. “Like the old Jim, New Jim could be grumpy and gruff, but he was surprisingly interested in ideas. What’s more, he seemed acutely aware that the world — and the city — were changing, and that he needed to be changing with them.”

Ultimately, Philly Mag decided to back the New Jim Kenney for the Democratic nomination.

“All elections are about hope, and this one more than most,” they conclude. “So as we endorse Jim Kenney in the Democratic primary, we simultaneously challenge him: Bury the old Jim Kenney once and for all, and give us the New Jim Kenney that a New Philadelphia so desperately needs.”