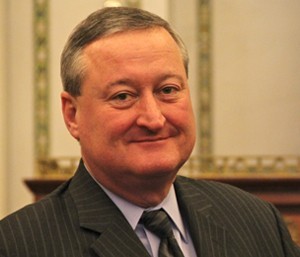 For weeks, if not months, we’ve lamented the lack of any independent polling in the Philly Mayoral race. Well, fret no more.

The Philadelphia Inquirer, Daily News, NBC10 and Telemundo 62 all teamed up for a survey.

The result is a massive lead for former City Councilman Jim Kenney.

Kenney stands at 42% while State Sen. Anthony Williams and ex-DA Lynne Abraham are tied for second with 15%.

Judge Nelson Diaz has 5% while Doug Oliver and Milton Street each received 3%.

Just 14% were undecided and 3% refused to answer.

Kenney’s performance is attributable to substantial cross-racial appeal. He holds a 40-point advantage over Abraham among white voters (58% to 18%). Yet he also has a narrow 33% to 25% lead over Williams among black voters.

By comparison, Williams receives just 6% of the white vote.

The number one issue was education and 44% of people concerned with education sided with Kenney.

The poll found Ramsey enjoyed a 78/11 favorable/unfavorable rating, the highest of any official in Philadelphia (even narrowly edging out former Mayor and Governor Ed Rendell).

As for the candidates themselves, Kenney recorded a 68% to 9% split while Williams favorability came in at 47%. Thirty percent have an unfavorable view of the State Senator.

“We looked at Ramsey’s popularity and it is translating to Kenney,” pollster Adam Geller said. “The lesson here is you don’t pick on a popular guy.”

The poll was conducted from May 9th to May 11th by National Research Inc., a Republican firm chosen because it would have no affiliation with the Democratic candidates. 600 likely primary voters were surveyed. The margin of error is plus or minus 4%.