Pittsburgh Mayor: Wagner on the Air (With Video)

Jack Wagner is on the air today. His campaign unveiled its introductory ad in the former Auditor General’s run for Mayor. It’s a basic resume spot.

“What this race is about is taking Pittsburgh to another level. This is a clear choice. As City Council President, we passed one of the first assault weapons bans in the country. As Auditor General, we took on the Wall Street Banks,” says Wagner in a mix of talking to the camera and over b-roll of him meeting voters. 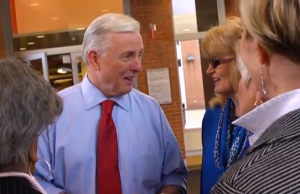 “We need to keep moving forward; create the jobs of the future; be an advocate for a strong educational system. Pittsburgh needs the kind of Mayor that provides leadership. That’s what I’ll do as Mayor of Pittsburgh.”

The ad was produced by Philadelphia-based firm Bronstein & Weaver. It’s a significant step up from the ‘small town used car dealership’-style ads of Wagner’s 2010 gubernatorial campaign.

Wagner’s campaign said it is airing mostly on broadcast with some cable. So far, just WPXI has posted the FEC-mandated details of the campaign’s details. Wagner is spending $19,000 on the NBC affiliate. They’re spending about $50,000 this week overall, a Wagner spokesman said.

The two have emerged as the most competitive candidates in the wake of Mayor Luke Ravenstahl’s decision not to seek re-election.

The ad spending was made possible by a technicality in Pittsburgh’s campaign finance law which allowed Wagner to use money from his statewide campaigns (roughly $300,000) in the mayoral primary.

“It’s not about who is first on the air; it’s about who has the know how and vision to transform Pittsburgh into a 21st-century city. Bill Peduto is committed to that cause. With Bill Peduto you get a leader who takes action; not an opportunistic candidate with shallow ideas,” she said.