National Democrats have a new laboratory for their “war on women” campaign messaging and it’s close to home. Planned Parenthood announced Wednesday that it will spend $100,000 against Ryan Mackenzie, the Republican running in a special election for state House in the Lehigh Valley.

The ad, set to air on local cable and WFMZ, blasts GOP hopeful Ryan Mackenzie by associating him with legislation – since stalled – that would mandate women seeking an abortion to obtain an ultrasound. 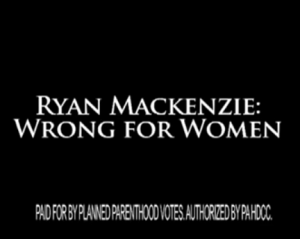 “Mackenzie’s Harrisburg friends want to force me to show my patients images of an ultrasound even when she doesn’t want to see it,” says a woman who identifies herself as nurse practitioner, “who helps women facing the difficult decision to end a pregnancy.”

“Worse Mackenzie’s friends would force a patient to take that image home, where an abuser could find it. That’s dangerous. That’s why Ryan Mackenzie’s wrong for Pennsylvania women.”

Their online ad is even harder-hitting, featuring a domestic abuse victim.

“The mandatory ultrasound bill in Pennsylvania is one of the most appalling and offensive government overreaches that could have had serious consequences if enacted,” said Cecile Richards, president of Planned Parenthood Action Fund, which administers Planned Parenthood Votes.

It’s a tough break for Mackenzie, who opposes the ultrasound bill (which has no serious shot at passing into law – it was yanked from the floor calendar shortly after the backlash began).

“The ad is a flat out lie as I don’t support the bill, which makes this attack a pathetic attempt to buy an election over a piece of legislation everyone in Pennsylvania knows is dead,” he said.

He criticized his opponent, Democrat Patrick Slattery, 41, for relying on out-of-state interest groups to throw his punches.

“Sadly, it appears that with unemployment still over 8 percent, 4 dollar a gallon gas and his support for higher property taxes for working families, Mr. Slattery would rather talk about anything but the future of our economy.

Mackenzie, 29, is the policy director for the Pennsylvania Department of Labor and Industry.

It’s a good district for Democrats to test the message. It stretches from the outskirts of Allentown and Emmaus to rural communities in Berks County, with a median income well above the state average. In other words, exactly the kind of fiscally conservative, socially moderate suburban voters the party will need if it hopes to regain seats in the fall.

Republicans took control of the Pa. House after a strong showing in the 2010 elections when they captured 13 seats.

In all likelihood, Mackenzie has the House Dem Campaign Committee to thank for his TV woes. They began airing a very similar ad last Wednesday (view below), which a few sources said caught Planned Parenthood’s eye via the Rachel Maddow show. The PP spot says it was authorized by HDCC.

Though moot, the ultrasound bill is likely to be a top issue for Pa Dems in the fall, particularly in socially liberal southeastern Pa. and the Lehigh Valley. You can guarantee that Dems will take the list of GOP co-sponsors into consideration when they pick their 2012 targets.

$100K is an enormous buy in an otherwise sleepy district, advertising wise. The amount is about equal to the media buys of each candidate, and will virtually ensure saturation in a district where 85 percent of resident have cable.

But is HD-134 the best Pa. target for Dems and Planned Parenthood?

6 seats are up on April 24, 3 of which are sure bets for Democrats. Of the 3 remaining seats, HD-134 is the hardest for Democrats. It’s the district of Republican former state Rep., now Lehigh County Judge Doug Reichley.

On top of that, KidsPeace, the organization for which Slattery is business manager, made headlines in recent days as the subject of unfavorable headlines, including mention of reports of possible mistreatment of children.

HD-153 would have been another possible target. The race to replace now-Montgomery County Commissioner Josh Shapiro has turned into a spirited battle between Republican attorney Nick Mattiachi and Madeleine Dean, an English professor and former attorney. One imagines that a Planned Parenthood ad would have played well there, even if the ad would have enjoyed less visibility.

The other district that is in play, HD-169 in Philadelphia, is likely to be relocated after redistricting is finalized – meaning neither party has the incentive to spend on expensive media there.