Playing Politics With The Media 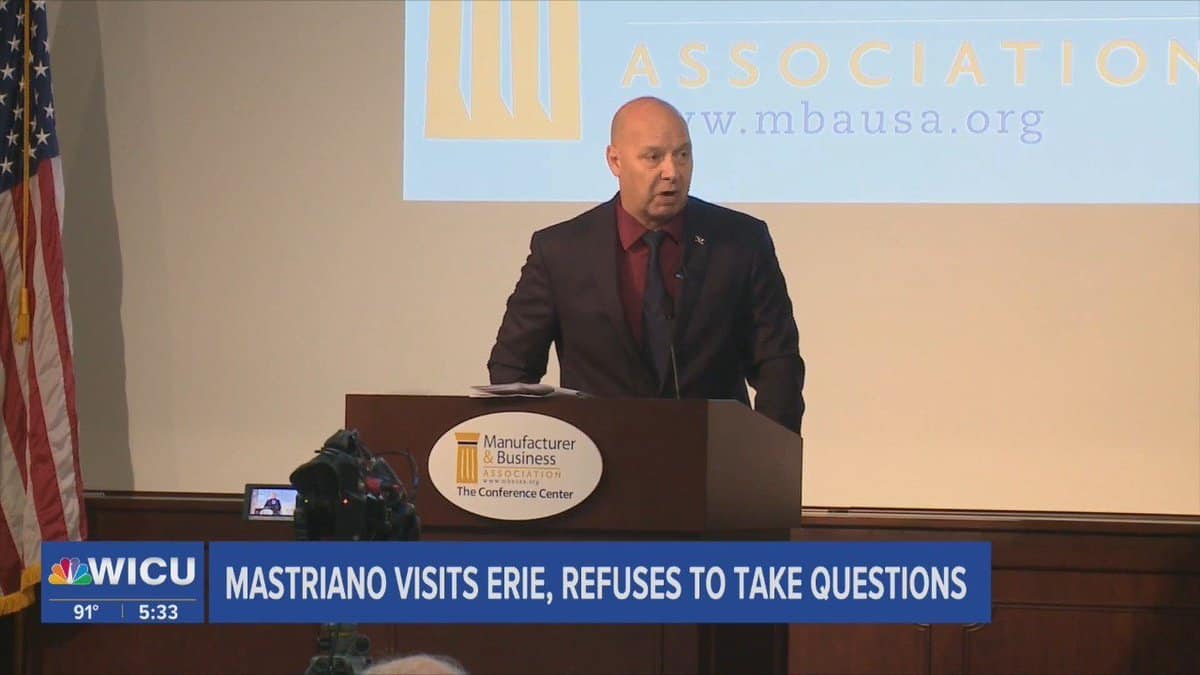 It is now clear that Republican Doug Mastriano believes that he has more than just Democrat Josh Shapiro as an opponent for governor’s mansion in Harrisburg.

He is also battling the media.

In the past week, the state senator from Franklin County has refused

The ⁦@dougmastriano⁩ campaign has not responded to multiple requests from #WTAE for an interview. This is what happened when we tried to speak with him at a campaign event. pic.twitter.com/SBNeTU0qNK 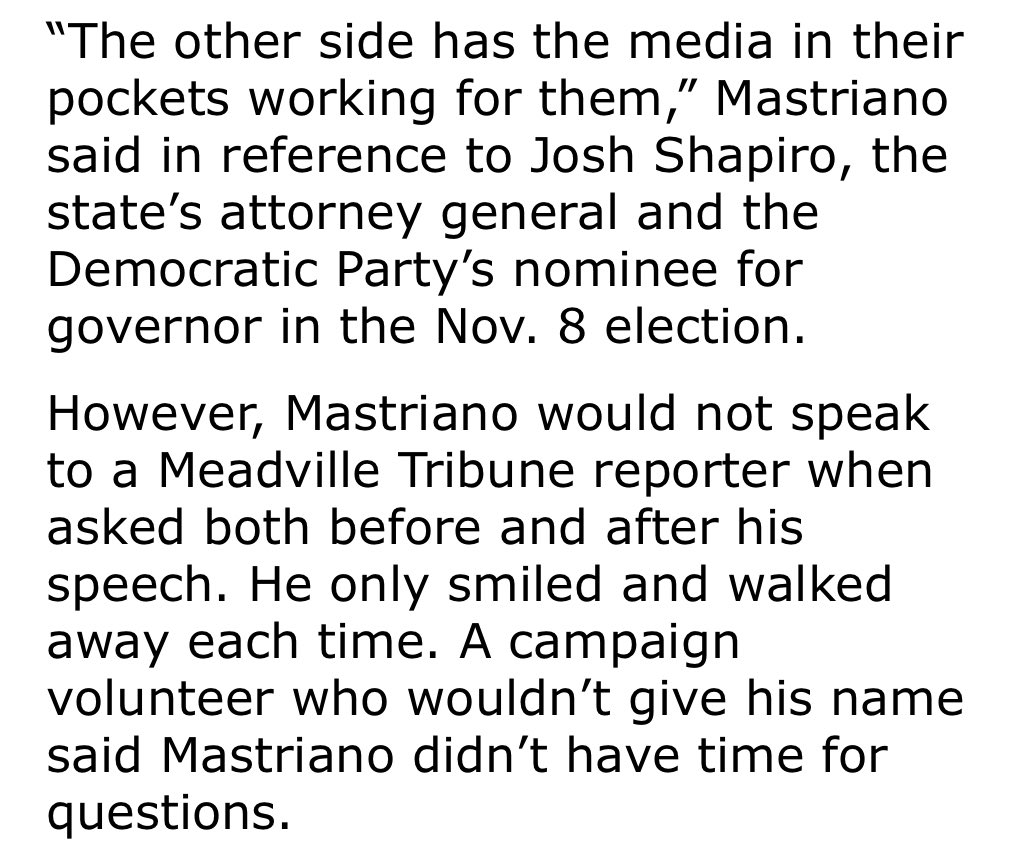 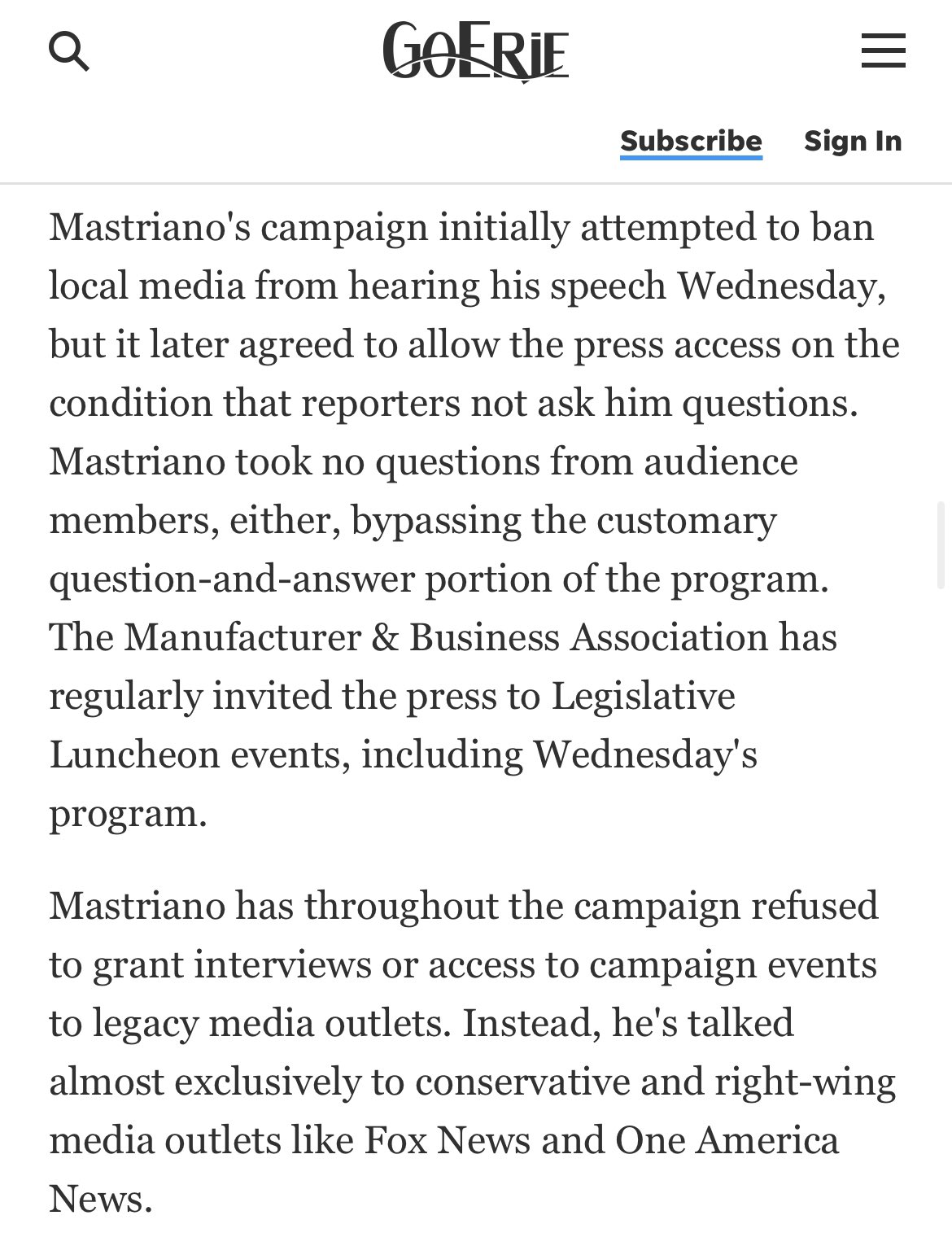 Can a candidate for office in a state as large as Pennsylvania continue to avoid the outlets that many older Keystone State voters turn to for their political information?

“There is just so much hostility within legacy media toward people with our point of view that you do have to ask yourself — after all these experiences, is it even worth it to try?,” said Matt Schlapp, the president of the American Conservative Union and its CPAC conferences.

“We in the state of Florida are not going to allow legacy media outlets to be involved in our primaries,” Gov. Ron DeSantis reportedly told the crowd of more than a thousand conservatives, who had paid at least $100 to attend the Sunshine Summit. “I’m not going to have a bunch of left-wing media people asking our candidates gotcha questions.”

Writing for POLITICO, Jack Shafer said “On paper, stiffing the press sounds like a winning strategy for the GOP. If you don’t talk to the mainstream press, you don’t have to sweat embarrassing questions about whether you think the 2020 election was cooked by the Democrats or whether Donald Trump should be given another term. Also, beating the press instead of talking to it is a time-honored method of 1) changing the subject, 2) avoiding gaffes and bad news and 3) providing politicians with an entertaining foil.”

Pennsylvania GOP consultant Chris Nicholas said, “It paid dividends for (Mastriano) in the primary but now we’re in the general election. I can understand not wanting to talk with media from outside the state, but local media is a crucial way for any candidate to define themselves and their opponent.”

There are downsides to the “diss the media” strategy.

1. Just because the candidate will not speak with a reporter, that does not mean that the story disappears. Rather, an earnest reporter will do a workaround, looking for comment(s) from those familiar with the subject.

2. Not all negative press is necessarily bad for a candidate. See Trump, Donald

3. While the points scored with the base for telling media to “take a hike” may be beneficial, the candidate loses points elsewhere by refusing to talk with the people.

4. And what about the independent and “swing” voters that every candidate needs to cross the finish line? What are they to think?

Mastriano was scheduled for a primetime appearance on the Fox News program, “Tucker Carlson Tonight,” last Monday but was scrubbed at the last minute. And he has recorded videos with Andrew Torba and Gab as well as Jack Posobiec and “Bannon’s War Room” on Rumble.

Neither to be confused with our friends in Meadville.

JJ Abbott, executive director of Commonwealth Communications and former press secretary for Gov. Tom Wolf, says, “Mastriano’s poor standing with key swing segments of voters should be a serious concern for his campaign. From independents to suburban voters, these voters already have strong unfavorable opinions of him. Many of these voters rely on and trust their local media. For someone who preaches accountability for his political opponents, he sets a completely different low standard for himself.

“You can’t be governor if you can’t even take criticism or answer questions about your positions, actions and statements. It is part of the job and Mastriano is proving every time he dodges local and Capitol reporters that he’s simply not up for it.”

Republican strategist Ray Zaborney said, “The media can be awful and full of bias. That being said even President Trump, who faced unprecedented bias, engages with them. Not engaging speaks to your flock but in Pennsylvania, I believe you need more than your flock. But that appears to be Senator Mastriano’s big bet.”

Shafer notes the wise words of former vice president Hubert Humphrey who once wrote, “It is always a risk to speak to the press: They are likely to report what you say.”