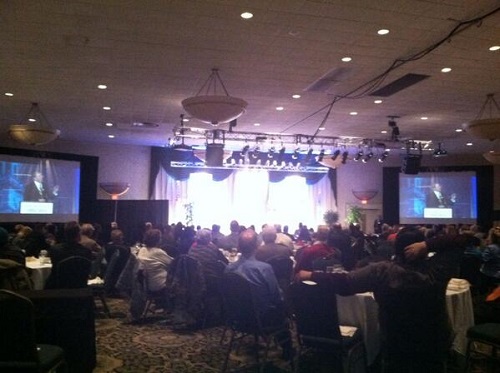 Michael Reagan, the adopted son of conservative hero Ronald Reagan, delighted the audience of the Pennsylvania Leadership Conference with anecdotes about his father.

From asking his father for a bigger allowance and learning about the American tax structure to his father instructing him not to get shot while wearing a new suit, Michael Reagan had the conservative audience in laughs for most of his address, but he also gave some electoral advice.

“Whether you’re a Tea Party supporter or an establishment Republican supporter you have one thing in common: you’re in this room listening to me,” Reagan said. “The enemy is not in this room.”

However, during Lieutenant Governor Jim Cawley’s speech to the crowd, one attendee shouted “Bob Guzzardi” when Cawley said “our next governor.”

The PLC attracts the right-of-establishment crowd of Pennsylvania, and is oft-referred to as the CPAC of Pennsylvania, but Reagan’s address eschewed Tea Party testing of ideological purity. He acknowledged that his father would have had a difficult time winning the Republican nomination for president in the 21st century, but said that Ronald had a different kind of appeal beyond politics.

He spoke of how his father was able to reach across the aisle to accomplish his legislative agenda.

“Ronald Reagan began the negotiations in an area where they agreed – that America was great,” Michael said, and told the audience about a dinner party that his father had with Tip O’Neil and the topic of taxes never once came up.

Michael took the stage after Lt. Gov. Cawley and was very complimentary.

“When he sat down, I said that is the best message I have heard from a Republican in, like, forever,” Michael told the audience, and Cawley did give a good speech.

“I know of at least 4 Pennsylvanians now that don’t get it,” Cawley said in a less-than-subtle allusion to the four Democrats running for governor. “They’ll tell you that their plans are all new. Folks, do not buy their snake oil.”

“There’s a lot at stake for our PA and in fact, this November, Pennsylvanians are going to face a very clear choice,” Cawley forecasted. “It is going to be a choice between more liberty and more government.”

Besides the Guzzardi outburst, his remarks seemed to be well-received by the conservatives in the room and the straw poll results reaffirmed the support for the incumbent.

There were 173 votes for Corbett, 28 for Bob Guzzardi, 3 for McCord, 1 for Tom Wolf and 0 for either Katie McGinty or Allyson Schwartz.

Unsurprisingly, 99% said they disapprove of Obama’s work in office.