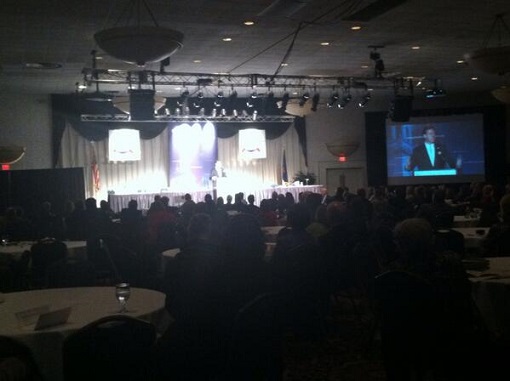 Conservatives converged on Camp HIll for their annual Leadership Conference, kicked off today with a keynote address by former Senator and presidential candidate Rick Santorum.

This is the 25th annual event, and Senator Pat Toomey gave a brief speech at the lunch event, as he apparently does annually but the event began with a lecture from Fred Anton of the Pennsylvania Leadership Council.

He stressed that he entirely supports Governor Tom Corbett’s administration and his re-election bid, but decried some of the problems he sees today in the Commonwealth.

Anton went through the merits of Right to Work legislation and moving forward paycheck protection.

Pat Toomey took the stage next, after being introduced as the most conservative US Senator in Pennsylvania history. Rick Santorum was backstage – unconfirmed whether he heard that claim.

Toomey reviewed the tanking of Debo Adegbile’s nomination, and the power of the minority party against the collusion of the Obama administration and the Democrats in the Senate. He also was very clear about why he worked so hard against that nomination.

“My opponents in this debate that falsely accuse me of something. This was not about the principle that every defendant deserves a competent defense; thats not what this was about. This was not about condemning an attorney for the actions of his client,” Toomey explained. “Adegbile’s offense was not that he did either of those things – this is about a principle. If you decide to fan the flames of racial strife in America and make a mockery of America itself; if you want to do that, you should do that. It’s a free country but don’t expect to run the civil rights division.”

He also talked about the expansion of the EPA and the ever-changing guidelines of the Affordable Care Act.

“These are examples of an administration of that is out of control and violating constitutional principles,” he said as he wound down his speech. “I am fighting this every way that I can, but given that we’re in the minority in the Senate, we are fighting with one hand behind our backs.”

Rick Santorum was the main course of the lunch event, exuding the compassionate conservatism for which he is known.

“We stand for the truth, don’t doubt that. It’s hard and inconvenient. We need to be less in your face and more living it out,” he told attendees, and encouraged them to boldly embrace their conservative values.

“America is changing. I would make the argument that America has changed,” Santorum claimed. “Between 35 and 40% in this country identify as conservatives. Between 15-20 identify as liberal. There are roughly twice as many who see themselves as conservative than identify with the other side, but we are losing ground.”

“Why is that happening? Lets look first at politics. If you look at what the GOP establishment would have us believe, to win elections, we would have to make ourselves more like the 20% instead of nominating people who stand more with the 40%.”

He also did not appear surprised that Mitt Romney lost the 2012 election. He shared statistics that about 22% of Americans chose their presidential pick based on whether they thought he cared about ‘people like me’ and President Obama won that factor with about 81%.

“Obama ran hardcore and he stood for all the things that all the Dmeocratic platform stood by,” Santorum said. “We have nominated candidates who apologize for the GOP platform and then we wonder why we lose.”

He then went on to laud the social conservative values upon which his presidential run were predicated, including the importance of heterosexual marriage, the traditional family and reproductive regulation.

Santorum wrapped up his speech with a popular reference to the Founding Fathers.

“We [the Americans] won [the Revolutionary War] because we wanted it more than they [the British] did and we were willing to sacrifice whatever it took,” Santorum said, comparing modern conservatives to the type of activists the Founding Fathers were.

“People ask me, Rick what can I do?” he continued. “The answer is simple, do something; whether it’s in politics, or in your family, or your school or your church. It should be everywhere, every place.”

“That’s why your school has textbooks you don’t agree with – because you put up with it,” he said, going on to give several other similar examples.

The Pennsylvania Leadership Conference continues with an afternoon of panels before an evening with Jonah Goldberg.