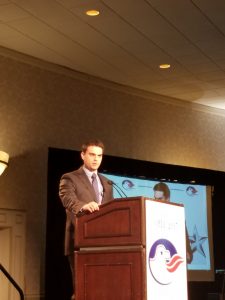 The Pennsylvania Leadership Conference (PLC) became a showcase for the uneasy alliance between Trumpism and conservatism.  The tension was highlighted during the PLC’s dinner with conservative political commentator Ben Shapiro.

“It is a mistake to not say when Trump says things are not true that they are not true,” Shapiro said. The former Breitbart editor has been one of Trump’s leading conservative critics for over a year.

His sentiment has been shared by some conservatives since Trump became President.

“Just because people win doesn’t mean they are right,” Shapiro said to scattered laughs from the audience.

The theme of this year’s entry in the long-running annual conference was to ensure conservatives stay true to their principles, even with Trump in the White House.

With all the breakout sessions, the theme is similar to the ones during Obama’s Presidency, maintain conservative values in the face of opposition.  The difference is, with Trump, the opposition will agree with you sometimes.

“There is a difference between being anti-left and being pro-conservatism,” Shapiro said. “Just because something pisses off the left doesn’t mean it’s good for conservatives.”

Many in the crowd remained silent through the portions of Shapiro’s speech where he critiqued the Trump movement, while others applauded every criticism.

“It is disturbing to me that there are people who will follow a leader no matter where is goes,” her continued.

Many of the crowd viewed Trump’s tactics with conservatives when they don’t agree with him as too far.

“That is not how I would have dealt with it,” Dick Cheney (not the former Vice-President), an attendee of the dinner, said of Trump’s threats against the Freedom Caucus after the vote on the American Health Care Act was pulled.

Chris Nicholas, a Republican strategist in attendance of the dinner agreed with Shapiro’s tact of working with Trump when he is right, and speaking out against him when he is wrong.

“When you agree with a President 100 percent of the time you lose your efficacy when debate comes up because you are a one note charlie,” he said.

The PLC is organized by Lowman Henry, a lifelong activist who chaired the Cruz campaign for president in the GOP primary.