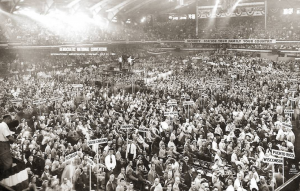 It’s the dream of every political junkie and the nightmare of every presidential campaign: a “brokered “convention that forces the nomination fight beyond the first ballot. But nightmare or fantasy, in the modern world, a brokered convention is the rarest of phenomenon. Almost 85 percent of Americans were not yet born the last time either party had such a contest.

For Democrats, that was in 1952 when it took three ballots to nominate Illinois Governor Adlai Stevenson. The GOP’s last multi-ballot convention occurred four years earlier in 1948. New York Governor Thomas Dewey won that one, also after three ballots.

Since 1952, no convention has gone beyond the first ballot.

But this long tradition in modern American political history may end in 2016. Less than a month away from the 2016 primaries and caucuses, the GOP has 12 active candidates. Perhaps half of these have the political support and/or resources to stay in the race to the convention, now only seven months away.

Currently, businessman Donald Trump, Senator Ted Cruz, and Senator Marco Rubio are the party’s national front-runners. The large field behind them, however, makes it possible that no one will emerge with a lead sizable enough to win on the first ballot. If that happens we have a contested convention and possibly a brokered nominee.

What would be the consequences of such a convention? How would the carefully scripted stage-managed convention model of the last half-century fit into a new, probably raucous environment created by a convention battle?

No one really knows. Once, party bosses, operating in proverbial backrooms, dominated presidential nominations. But since the 1960s, conventions have had no meaningful role in nominating candidates, as most delegates are now chosen based on candidate votes in party primaries and caucuses.

As historian James Paterson has put it, conventions have become “scripted, anachronistic rituals, not decision-making bodies.” Instead, party primaries and caucuses have become the de facto nomination mechanism; successful nominees have arrived at the convention with the delegate votes needed or close to needed for a first ballot nomination.

If that doesn’t happen in 2016, the convention itself must choose the nominee, as it did from the 1830s to the 1950s. Earlier contested conventions were “brokered,” a sanitized term for describing the hard-nosed horse-trading carried on by the party bosses. Sometimes, these contests went on for several days and dozens of ballots, and the battles were often bruising. The longest was the Democratic Convention in 1924 that went 102 ballots before nominating John W. Davis.

But a 2016-era brokered convention can’t follow this script because the party bosses that made it work are gone. In their place is an array of campaigns, candidates, consultants, and constituent groups that somehow will have to figure out how to broker a nomination in the modern era.

The nearest example we have of how crazy it might get is the 1976 Republican Convention when Ronald Reagan tried to block Gerald Ford’s nomination by naming his vice president pick before the convention.

But zany ideas and party leadership vacuums may be among the milder problems, if the nomination was unresolved by the convention. More unsettling would be the conflict unleashed within the party and played out on national television.

It is no coincidence that brokered conventions ended after networks began to televise them. The Republican’s 1952 convention illustrates why. Though delegates actually settled on the first ballot when Dwight Eisenhower beat Robert Taft, the intra-party brawling that preceded the Eisenhower victory appalled thousands who watched it on TV. Since that time, both parties try mightily to manage their convention as political love feasts – lest they antagonize viewers who will be voters in November.

How this will all play out in 2016 will be clearer in the next 90 days. Nevertheless, Republicans with their crowded field may not be able to stop the political forces bearing down on them.

The outcomes that could play out seem endless. Central to the drama will be the almost existential struggle between “establishment” candidates like Bush, Rubio and Christie and the anti-establishment candidates like Trump, Carson and Cruz. Any attempts at the convention to freeze out the unconventional candidates will carry enormous cost for Republicans, including a badly divided party or one producing a third-party candidate.

Then there’s the knotty problem of deciding who brokers the brokered convention. As noted, the old bosses are long gone, replaced by no one with enough power to make a deal stand up.

But the nomination process must seem fair and evenhanded. For Republicans in 2016, how they choose their nominee may be more important than the actual nominee.