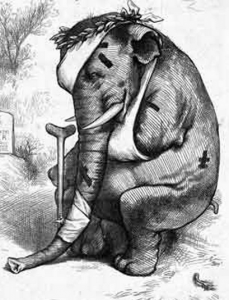 Most attention in the bruising battle to adopt the recently enacted Pennsylvania budget focused on whether the state budget passed on time. It did.

But a story far more important than budget passage itself was largely missed in covering the late night, last- minute theatrics now de rigueur with state budgets. That story poignantly revealed to those watching the deep polarization that now exists within the Pennsylvania legislature.

As widely reported, these three highly touted priorities failed to pass, shocking many observers who expected at least some would pass, since Corbett’s own Republicans hold majority control of both houses of the state legislature.

Let’s be clear. State history teaches that one party control does not guarantee a ready-made consensus for a governor’s agenda. One needs go back no further than the last elected Republican governor to find an example. Gov. Tom Ridge, a popular and effective governor, enjoyed Republican control of the legislature during his entire eight year tenure. Yet he still failed to pass several of his priorities, including school choice and liquor privatization.

Ridge, however, never made school choice or liquor privatization a must win for his administration. Corbett by contrast did make passage of his priorities the central policy focus of his first term. Consequently, the failure to pass these items cannot be interpreted other than a failure for Gov. Corbett.

To be sure it was that. But much more important and much less well understood, it was also a defining moment for the state legislature.

The making of the legislative sausage is the quintessential “black box” in state politics. Few get to see how it gets made; fewer perhaps care. But understanding what happened and didn’t during those crucial end of June days probably matter more to state politics than the ultimate fate of Tom Corbett.

What happened can be summed up in a single word: “partisanship”– pervasive, prevalent, pernicious, partisanship–more intense than any in modern times. Partisanship also has polarized not only Republicans from Democrats, but likewise the state house from the state senate, ominously mirroring the same toxic partisanship so virulently widespread in the U.S. Congress.

The historical causes of Pennsylvania’s increasingly polarized politics are multiple, but three major events going back to the last decade are pivotal, notably:

·The legal and political fallout from the infamous legislative pay hike of 2005;

·The huge GOP 2010 sweep in Pennsylvania, giving Republicans a political trifecta–the governorship plus large majorities in both houses of the legislature.

Party sweeps are not unique in state politics. But the conservatives arriving in Harrisburg as a result of the last three elections represented a very different type of politician than normally seen in Pennsylvania.

Unlike their earlier brethren they are much less practical and far less likely to compromise. They are much more rigidly ideological, eschew compromise as a matter of principle and have a limited view of the role of state government. These new conservatives now form an operational majority in the state house.

House Democrats also have changed. Republicans may have moved further to the right than Democrats to the left. But Democrats, too, have moved far from the center. Having lost much of their once formidable rural base, house Democrats increasingly are confined to urban constituencies. Consequently, they have become much more ideologically oriented, much more liberal and much less likely to compromise.

Conversely, the senate remains less ideological, less rigid and far more likely to bargain on key legislation. The sharp contrast between the two chambers was exposed dramatically during the recent budget battle. In the senate, three key pieces of budget legislation, the 2013 budget, a Medicaid expansion bill and transportation funding passed with considerable bipartisan support. In the house, by sharp contrast, two separate budget bills plus a liquor privatization bill passed without a single Democratic vote.

The implications of this growing polarization stretch far beyond the 2013 budget battle. Republicans in the house, legatees of Corbett’s 2010 conservative takeover, should have been his champions, insuring that he and his agenda would triumph. But instead, refusing to compromise, adapt or bargain, they have killed what they would create.

This in turn has further undercut Corbett’s credibility with voters providing Democrats abundant opportunities to charge Republicans with failure to govern and planting the seeds that may regain the governorship for Democrats in 2014 as well as one or both legislative chambers.

One of the oldest axioms in politics is that governing has a price as the party in power gradually wears out its welcome with voters. But the 2013 budget battle reminds us that there is also a price for not governing. State Republicans might soon learn how high that price can be.