Politically Uncorrected: A Tie in the U.S. Senate: Turning Even into Odd 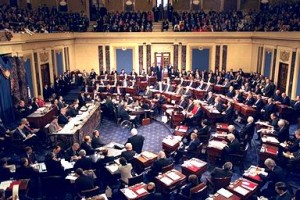 Think things can’t get any worse with the approval rating of Congress polling as low as a 7 percent while national problems pile up and an increasingly dysfunctional House and Senate continue to set new records for sheer futility?

If so, you would be wrong. They can get a lot worse. And they just might after Election Day, Nov. 4th.

The problem is the Senate and the issue is whether either party will win the 51 votes minimally needed to organize and operate that body for the next two years. The prospect for a tied senate at 50 to 50 after Nov. 4 is very real as we enter the final days of campaigning.

Right now, 45 seats are probably safe for Democrats, 47 for Republicans. Another 8 seats are competitive meaning either party could win. So Republicans have to win 4 of them to win the Senate, while fewer could give the body to Democrats or even produce a 50-50 tie.

The GOP is well positioned. In fact, most assessments by independent analysts forecast Republican’s will pick up between four and eight senate seats.

The fly in the Republican ointment, however, is that there are two “Independents” with a prospect for victory—Kansas and South Dakota. If at least one of them is victorious, it becomes dicey – enough so that a 50 to 50 split might occur, producing chaos across Congress.

If a tie should exist after Election Day, Article I, Section 1 of the U.S. Constitution would be invoked giving the vice president, one Joseph Biden, the power to vote and break ties that exist. In normal times the vice president constitutionally presides over the Senate but does not vote on matters before the Senate unless a tie exists.

A constitutional tie in the Senate would be profoundly troubling, given the disarray in national politics. It would either intensify the extreme polarization already stultifying our politics – or as bad, bring government to even more of a standstill than already exists.  As a country, the prospects of a Senate tie makes us similar to an already ill patient suddenly faced with an even more calamitous sickness.

The worst precedent in Senate history of a divided chamber occurred after the election of 1880. The possible parallels to 2014 are chilling. Then the Senate was split 37 Republicans, 37 Democrats, with two Independents. With the new session in 1881, reorganization of the Senate took place.  The two Independents went their separate ways, Illinois Senator David A. Davis, joined the Democrats while Virginian William Mahone caucused with the Republicans.

The tiebreaker was newly elected Vice President Republican Chester Arthur, but Republicans, lacking sufficient members in the chamber, were not able to organize properly. Consequently, Democrats maintained control of the committee chairmanships they had held previously, as the operations of the U.S. Senate descended into a farce.

Ultimately, it took the Senate two years to finally resolve its leadership crisis, blessedly ending one of the stranger moments in Senate history.

The most recent 50 to 50 Senate split occurred in the tumult of January 2001, in the aftermath of the disputed Bush-Gore presidential election. Al Gore, as Clinton’ outgoing vice president, was the tiebreaker for the first 17 days of the new Congress. When Dick Cheney became vice president on January 20, he became the tiebreaker. Cheney broke several ties during his years in office, but only two in the period when the Senate party composition was equally divided.

Awkward as that was, some amity still existed in Congress and both sides worked out arrangement to make it all work.

If you think a similar tie would work in 2014 then you might be interested in buying a slightly used bridge in Brooklyn.

Let’s be clear: given the extreme polarization and excessive partisanship in Washington today, nothing good at all is going to happen with a 50-50 Senate split. Challenges the Senate will likely confront in the new Congress — immigration, energy, foreign policy, amendments to the Affordable Care Act, deciding executive appointments and Supreme court confirmations –are simply not going to be met with an evenly split Senate.

The wild card in what is otherwise a horrific scenario is Vice President Biden. Biden is a creature of the Senate, long a part of the Senate establishment and someone with close relationships with Senate colleagues on both side of the aisle. Biden might make a tie work if anyone can.

We should all hope he doesn’t need to do it – and we don’t need to find out if he can.