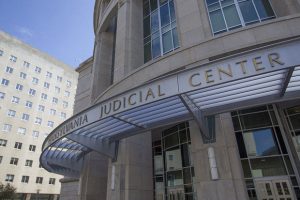 Impeachment is the nuclear option undergirding the separation of powers framework of American government. An antique vestige borrowed from British tradition, it was incorporated into the American constitution in 1787 – and migrated from there into most state constitutions. Fundamentally, impeachment in a bicameral legislature is a political indictment voted by the lower house, precipitating a formal trial in the upper house.  Possible conviction and removal from office can result.

The federal constitution established “high crimes and misdemeanors” as a justification for impeachment. State constitutions range from similar language to very specific acts.

Conceived as a procedure to keep the executive branch accountable, it has ironically been used or threatened most frequently against sitting judges.

The rarity combined with the gravity of impeachment explains the considerable consternation emanating from Pennsylvania’s political community as a result of the effort by 12 Republican state lawmakers to impeach four justices on the Pennsylvania Supreme Court for allegedly overstepping their constitutional prerogatives.

The issue at hand is the court’s imposition of a remedial congressional map that the justices adopted after ruling the 2011 map violated the state constitution. Republicans appealed that decision to the U.S. Supreme Court and lost, failing to get even a hearing on a lawsuit aimed at suppressing the new map.

The pushback was both speedy and bi-partisan. Perhaps the most notable came from Chief Justice Thomas Saylor, himself a Republican opposed to the new map.  Justice Saylor minced no words in condemning the actions from his GOP colleagues in the state house:  “Threats of impeachment directed against Justices because of their decision in a particular case are an attack upon an independent judiciary, which is an essential component of our constitutional plan of government.”

The lead Republican in the impeachment effort is Rep. Cris Dush (Jefferson and Indiana counties), who argues that the court usurped the authority of the legislature and executive branches:  “This is basically 7th grade civics class all over again, the separation of powers and the authority of the legislature and … the courts basically are there to interpret when there’s conflict in the law, and they don’t have any sovereignty.”

Some unkind observers have suggested that Representative Dush might have missed one or two of his seventh grade civics classes. However, at least 11 of his Republican colleagues have agreed to co-sponsor his impeachment resolution. They claim GOP leadership has promised a vote on the issue. Meanwhile, U.S. Senator Pat Toomey seems supportive while leading GOP gubernatorial candidate Scott Wagner has embraced the idea.

The state constitution contains a general cause encapsulating the cause for impeachment: “for any misbehavior in office.”   In practice, however, an impeachable act is whatever a majority of the lower house says it is. An impeachable offense is the ultimate political crime.

Following a House impeachment a trial takes place in the Senate; if adjudged guilty the ultimate punishment is the forfeiture of office and a ban from holding public office in the future.

Impeachment is often proposed, but rarely imposed. In fact, the process is so difficult that there have been only four impeachments in the state’s history – and one close call.

The close call occurred in 1811 and also involved a jurist, one Thomas Cooper, a Northumberland county judge. On a recommendation from the legislature, the governor removed Cooper, eliminating any need for impeachment.

Before that in 1802 three justices of the state Supreme Court were impeached by the House, essentially for political reasons, but not convicted in the Senate.

The other impeachment involved Supreme Court Justice Rolf Larsen in 1994. Larsen was controversial while widely perceived as difficult and contentious among his colleagues. The House impeached him by the nail-biting margin of 199 to 0, on seven charges of various types of misbehavior. He was convicted in the Senate on one count of improper behavior. The vote was an equally close 49 to 0. The impeachment itself followed Larsen’s separate conviction in Allegheny County court of two counts of criminal conspiracy.

Larsen was the poster child for what it takes to actually trigger impeachment. And that was a lot. Nothing like this is going on with the current impeachment talk – which is mostly saber rattling, and not that many sabers.

Moreover, there is no widespread support for impeachment among the Republican leadership in the legislature. Both House Speaker Mike Turzai and Majority Leader Dave Reed have distanced themselves from the proposal.  Republicans may have the votes to both impeach and convict but that’s simply not going to happen. And it should not.

That’s good for democracy, good for Pennsylvania and good for Republicans.