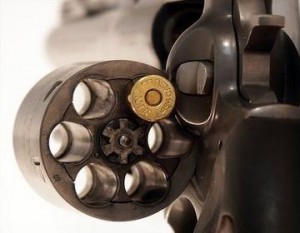 In this most contentious election year, one proposition looms not at all contentious: few disagree that America faces a host of imposing challenges–both foreign and domestic.

But while we clearly recognize the formidable nature of those challenges, we utterly fail to understand that it is our flawed presidential electoral system that prevents us from solving them.

Rather than serve as a solution, our electoral system has become part of the problem. It has become America’s great game of Electoral College roulette.
.
Roulette is a fitting metaphor for the insidious presidential election system that has evolved in America over the past several decades. Like its notorious namesake “Russian roulette,” American roulette is reckless, risky and potentially fatal.

That system has transformed presidential campaigns into a series of state contests aimed at a small minority of voters rather than a bona fide national campaign. Consequently, nearly all presidential campaigning takes place in a handful of states with the remaining states largely ignored. In 2008 for example, more than 60 percent of the TV advertising dollars and candidate visits were concentrated in just five states, a practice continuing this year.

These pernicious practices undermine our ability to have a serious and honest debate about national problems during an election. Then after an election is over, these same practices leave a new president governing a still divided deeply polarized nation.

Let’s be clear. Not all of this is new. Persistent problems with the Electoral College itself are almost as old as the Republic. Since parties emerged, some states always mattered more than others because of the size of their electoral votes. In addition sectional and ethnic voting too often precluded truly national campaigns. The Electoral College has never been a really “good system,” but until recently it has been a “good enough” system.

In fact, since about 1970, we have witnessed a slow, steady, almost invisible polarization of the electorate—exacerbated by decades of politicized congressional redistricting.

This congressional redistricting, motivated mostly by both parties desire to accumulate “safe” seats, has produced a nation more divided along ideological and party lines that perhaps anytime in modern  history. The result is a highly partisan, bitterly divisive and deeply polarized electorate.

Today most states, big and small, are safe for one party or the other before the election even begins. Consequently–and this is the critical problem–the real election is a contest for the five to 10 percent of the electorate not irreversibly divided among partisan or ideological lines.

The violence to democracy is only too clear. But even more important, it prevents the election from becoming a serious national dialogue on the challenges that confront us. Instead, campaigns deteriorate into a series of local races that focus on parochial, even trivial matters of marginal importance to the nation itself.

Over the remaining days of the 2012 campaign, for example, residents of a half dozen or so “swing states” will see over and over again presidential campaign entourages crisscrossing their respective states while the vast proportion of the nation will nary see a campaign ad, let alone a candidate.

One consequence is that the day after the election, we will awake to find that the election has decided little. Our politicians will continue to pursue the same dysfunctional policies in the same dysfunctional way. And we will again realize that the nation has not moved forward to address its great problems. It hasn’t because presidential elections no longer address those compelling issues faced by the nation as a whole, pandering instead to a relatively small number of voters in a half dozen key states.

The failure of our presidential electoral system is not all bad news. The good news is that it is our flawed electoral system and not us that is inhibiting solution of our urgent problems. We really can solve the vexing economic political and social challenges that confront us.

What we lack is not a way to do it but the will to do it. And we lack that will, in substantial part, because our electoral system is failing us.

What we do about that failure may be the single most important challenge we face today. The electoral system is fixable–but unless we do fix it, our other problems will only worsen—and until we do fix it we are going to have difficulty fixing much else.