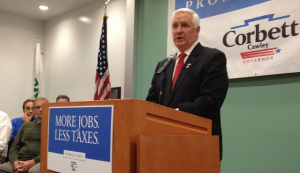 “Running against Harrisburg” is a popular strategy. Most modern gubernatorial candidates seeking a first term, including incumbent Gov. Tom Corbett, have “run against Harrisburg.” They focus their campaigns heavily toward attacking Harrisburg “insiders” and the “Harrisburg culture.”

But while most gubernatorial aspirants run against Harrisburg, no incumbent governor seeking a second term has ever done so — until now.

Corbett is gearing up to run against Harrisburg for reelection to a second term, a strategy he successfully employed in his bid for the office in 2010, when he promised to deal with an exploding budget deficit, bloated bureaucracy and a Democratic Party eight years in office. He proposed to privatize many aspects of state government, reduce the imprint of state government, and make government more accountable.

His highest priorities – privatizing management of the state lottery and the state liquor stores, followed by fixing the state’s troubled pension system – have been stymied by the Harrisburg culture, which is notoriously resistant to change.

While confronting Harrisburg’s more or less chronic aversion to reform, Corbett also fell afoul of the sharp partisan polarization now embedded in both state and national politics. He was trapped between the factionalism in his own party in the state House, and the moderates in the Senate – between the reform minimalists and hard-charging reformers. Corbett’s own failure to build relationships with legislative leaders didn’t help him.

What actually happens when an unmovable object meets an irresistible force has fascinated philosophers for centuries. In Pennsylvania politics, however, we already know the answer to this classic paradox. What happens is nothing – more precisely a long series of nothings as in no LCB reform, no pension reform, no ethics reform, no campaign finance reform, no lobbyist reform, etc.

Consequently, Tom Corbett, after four years in office, has little to show for it – unless you count mounting frustration, growing animosities, a divided legislative leadership, and failure to enact most of his major agenda.

So Corbett, making a virtue out of a necessity, is becoming the first gubernatorial candidate in history to run against Harrisburg for a second term.

So far, so good. Actually, running against Harrisburg has not just been a favorite strategy in state politics; it has also been a successful strategy. In modern times, going back to Gov. Milton Shapp in the 1970s, at least four governors, including Corbett, have earned a first term sticking it to the “Harrisburg culture.”

Moreover, one could argue that “Harrisburg,” with its cliques, obstructionist tactics, recurring corrupt behavior and anti-reform ethos really is the problem. Democratic President Harry Truman, also trailing badly in the polls, made something like this work for him in his classic 1948 comeback, running against a “do nothing” Republican Congress. However, unlike Corbett’s situation, Truman’s party didn’t control Congress, which made Truman’s strategy credible. Still, why can’t Tom Corbett do the same?

Pennsylvania’s political observers have pointed out the challenges Corbett faces running against Harrisburg.

Unlike four years ago, he can’t run as an outsider riding into town on a white horse to round up the bad guys. As incumbent governor, Corbett is the quintessential insider, believed by many voters to be part of the problem. Corbett has become one of the bad guys.

Then, there is the inconvenient fact that the Harrisburg he runs against is controlled by his own party. Corbett is a Republican, and Republicans control the legislature. The average voter may not spend a lot of time thinking about politics, but they are likely to think about this particular conundrum: Why can’t Corbett work with his own party?

Last, but not least, is the political problem. If Corbett runs against his own party’s legislative leadership, it could divide Republicans, leaving them weaker for the fall election. In the latest Franklin & Marshall Poll, Corbett now only attracts 55 percent of his own party’s voters.  Add to this challenge a bitter fight with the legislature, and it becomes more and more likely that Republican voters will come to view an embattled governor as an apparent loser. They may not show up at the polls election day.

Notwithstanding these manifold problems, running against Harrisburg might still be Corbett’s best bad choice in a race with few good choices. It’s a strategy born equally of frustration and desperation. No one has ever done, or even attempted, what Corbett is trying to do. But then no governor in modern times has ever found himself where Corbett finds himself today.

Corbett, who has long supported Internet gambling, is rolling the dice one last time. It’s a long shot, to be sure, but he probably has to take it. Many believe Corbett may go down to defeat in November, but if so, he’s not going quietly.