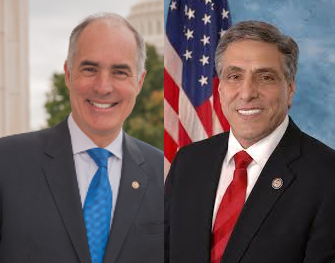 Pennsylvania is holding a U.S. Senate race this year (if you hadn’t heard, you are apparently not alone). Congressman Lou Barletta (R) is challenging incumbent U.S. Senator Bob Casey (D).

While Casey and Barletta are the names on the ballot, Donald Trump is the issue in the race. Barletta has been joined at the hip with Trump on policy since becoming a very early supporter and co-chair of Trump’s Pennsylvania 2016 campaign. Consequently, Barletta is perceived as one of Trump’s acolytes while Casey has been one of his strongest critics.

At the moment Barletta isn’t doing too well. The RealClearPolitics polling average has him down about 15 points.

Why Barletta isn’t doing better is a good question.

After all, the congressman is a four-term incumbent in his district (the old PA 11th which extends from the Pocono regions to southeast of Harrisburg). Moreover, in the district he’s been fairly popular, personable, and with some accomplishments.

He was seriously considered for a major cabinet post (Labor) in the Trump administration and President Trump strongly supports him. In his youth, he was actually a decent enough baseball player to get a major league tryout.

But Barletta is running far behind in spite of these qualities. Indeed, Barletta’s plight owes to the convergence of a virtual avalanche of political forces that threaten to fatally wreck his candidacy.

His problems start with his opponent. He is running against a storied name in state politics, Senator Bob Casey Jr., the scion of a near legendary former governor. Casey himself has run five times statewide for three separate offices in the past 15 years, winning all in a landslide. He is a formidable opponent.

But Barletta’s troubles run much deeper than Casey, offering in fact a case study about what matters when running for statewide office in Pennsylvania. The political resources any candidate needs to run successfully are well known. One of them is high statewide name recognition, which is a powerful predictor of electoral success.

The president’s popularity is also important. Candidates of the administration in power almost always do better the more the president is liked and his job performance is strong.

Then there is money: always important in modern politics. As a challenger you would want either deep pocket supporters or the ability to personally fund raise – preferably both.

Policy matters too: running on issues popular with voters is a big advantage to any candidate. Particularly important would be having a popular “signature” issue associated with your candidacy– one issue you are well known for.

There also are a few other things good to possess. Experience running a statewide campaign is one of them, especially in a big, multi-media market state like Pennsylvania – while being the candidate of the largest (majority) state political party helps too.

This is a pretty good list of the major political resources any challenger would want, especially running against a well-entrenched incumbent.

It’s also a pretty good explanation for why Barletta is running 15 points behind Casey in the polls.

“Name recognition” or more precisely lack of it illustrates Barletta’s challenge. Ominously, his name recognition is around 45 percent; that means half of the state’s voters have never heard of him.

What about presidential popularity? In Pennsylvania, President Trump is treading water with an approval rating of about 38%. Not good for any candidate!

And there is the mid-term problem – during mid-terms senatorial challengers of the president’s party beat incumbents 9% of the time – and 91% of the time they don’t. Money doesn’t augur well for Barletta either. Casey has been outraising Barletta about 7 to 1. Perhaps worse, the often-influential national Republican PAC’s are not putting significant funds into Barletta’s race.

Issues also look problematic: Barletta’s overall record is strongly conservative in a state fairly described as center-right. Most precarious for him is immigration, his “signature issue”, where he is positioned hand-in-glove with the president. About one-third of Pennsylvanian’s approve while almost 60 percent disapprove of the Trump/Barletta immigration stances. Barletta’s immigration policies are particularly unpopular in the voter thick Philadelphia suburbs.

Alas for Barletta, he also doesn’t score well in other important electoral assets, such as statewide experience, or running as the candidate of the majority party. He has never run in a statewide race, and his Republican Party has about 815,000 fewer voter registrations than the majority Democrats.

Can we then say unequivocally that Barletta will lose his contest with Casey?

No!  Elections are unpredictable and electorates even more so. Donald Trump is just the most recent prominent example stretching back through American history of “sure loser” candidates that won on election day.

But we remember so well the “underdogs” that win because they are the rare exception – and the only rare exception about this race so far is the unusual combination of forces arrayed against Barletta – low name recognition, bad timing, an unpopular president, feeble fundraising and weak issue messaging.

Indeed, Barletta has found himself caught in a perfect storm: a confluence of hostile political winds relentlessly battering his campaign, making him the wrong candidate in the wrong race at the wrong time.

It’s not hard imagining Congressman Barletta winning other races in other years. It’s just hard to imagine that happening in 2018.