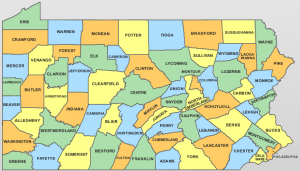 How many gubernatorial elections will Pennsylvania hold this November? A trick question?  Yes, sort of – but the question reveals an important and too little recognized characteristic of state elections.

We vote statewide, but the votes come from 67 counties and seven distinct and diverse geographic regions. Indeed, the state includes such a rich range of political types that it often seems there is more than one Pennsylvania – and on election night, more than one election.

One way to illustrate this is to take a brief tour of the seven state regions used in the Franklin and Marshal College Poll.  The regions exemplify the immense variety found across the state’s political geography.  Moving clockwise, we begin in “Northwestern Pennsylvania.”

NORTHWESTERN PENNSYLVANIA
The Northwest includes 14 counties and ranges from Erie County south to Lawrence County and west to Clearfield County. It encompasses about nine percent of the voting population.  It is largely rural, with some farming, and light manufacturing.

The voter registration in the Northwest is virtually even–Democratic 44 percent, Republican 44 percent, and many cultural conservatives live here. Nevertheless, Democrat Wolf has a substantial double digit lead over Republican Corbett in the latest F&M poll. The Northwest has the second highest proportion of seniors and the lowest proportion of folks earning less than $75,000 per year. The region has the highest percentage of born again Christians, translating into many pro-life voters.  Gun ownership is also high.

Election night question – Can Corbett in the final days convince the many Republicans here to “come home” and support him?

CENTRAL PENNSYLVANIA
Geographically, it’s the largest of the regions. It includes 29 counties and the Republicans hold a 49 percent to 37 percent lead over the Democrats.  This is the well-known Pennsylvania “T,” ranging from Potter and Tioga counties, south to York, Adams, and Lancaster. More people here describe their ideology as conservative than in any other region.  It also has one of the highest rates of gun ownership.

Central includes about 26 percent of the state’s voting population.  Central residents self-identify as Republicans by about 5 points.  It should be one of Corbett’s strongest regions but Wolf leads slightly in the region.

Government and politicians in general are controversial subjects here and education is a key issue.

Election night question—Corbett needs to win here and win convincing. Can he win the “T” by a wide margin? If not, it will be a long night for the GOP.

NORTHEASTERN PENNSYLVANIA
Ten counties make up the Northeast. From populous Scranton and Wilkes-Barre, it ranges from the new growth Pocono area south to the economically diverse Northampton and Lehigh counties. The Northeast comprises about 12 percent of the voting population. The Democratic registration edge is pronounced, 56 percent to 30 percent.

This is strong Democratic country, and Democrat Wolf has a narrow double digit lead.

The region has the state’s highest proportion of Catholics.  Voters in the region are moderate on social issues, such as abortion and gun control.

Education and school issues as well as taxes are driving issues here.

Election night question – This region has been an early evening bellwether. Wolf’s lead seems substantial here. Can Corbett come out of the region with a respectable showing?

PHILADELPHIA
The region consists entirely of the city of Philadelphia—about 10 percent of the voting population of the state   It’s Democrat Wolf’s domain, where he draws almost two-thirds of the vote. Philadelphia registers overwhelmingly Democratic, but actual voting turnout can be disappointing.

Philadelphians are most likely of voters in all regions to call themselves liberals, and least likely to describe themselves as conservatives.  It has the largest non- white population in the state, and one of the lowest proportions of college graduates.

Philadelphians are most likely to favor gun control. Education and schools issues are huge here, topping every other region of the state.

Election night question—If voters turn out they will overwhelmingly support Wolf, but without a presidential race, will they turn out?

SOUTHEASTERN PENNSYLVANIA
The Southeast comprises Philadelphia’s four bedroom counties—Bucks, Chester, Delaware, and Montgomery. It’s about 23 percent of the voting population. Democrats hold a slim 43 to 41 registration edge in the region. Once solidly Republican, it has been steadily moving toward the Democratic Party. Wolf has a small double digit lead there.

The region is quintessentially suburbia. It reports the state’s highest family incomes—and lowest proportion of born again Christians. People here are as likely as anywhere in the state to describe themselves as political moderates.

The region’s residents tend to support gun control, and are the least likely, along with Philadelphians, to take a strong pro-life position. Education and schools are driving issues here.

Election night question – Can Corbett appeal to the vestigial Republicanism still present in pockets of the southeast?  In the 21st century, statewide elections are often won or lost in this suburban enclave – and this one will be too.

SOUTHWESTERN PENNSYLVANIA
Southwest includes eight counties surrounding Pittsburgh—about 11 percent of the state’s voting population.  It’s 36% Republican and 53 Democratic in voter registration. This is the old mining and mill town part of the state. Taxes and unemployment are the top issues here.

The region usually trends strongly Democratic, but includes many “cultural conservatives” that have and will vote Republican. Nonetheless, Wolf has a substantial large lead here.

The region is one of the most Catholic in the state. Gun ownership here is highest in the state (58 percent) and the region has the lowest percentage of households earning $75,000 or more.

Election night question—This should be one of Corbett’s strongest areas.  Do the cultural issues finally grab hold here? If so, it could be one of the surprises of the evening.

ALLEGHENY COUNTY
Allegheny County includes Pittsburgh and surrounding municipalities, and comprises nine percent of the state’s voting population. Allegheny registers Democratic, 69 to 31 percent, and is tied for the state’s highest proportion of seniors. It sometimes votes for “home town” Republicans like John Heinz, Dick Thornburgh, and Barbara Hafer. Corbett has Allegheny County roots and he won the county in 2010.

Wolf has a large double digit lead here. Education and schools issues dwarf all others this year.