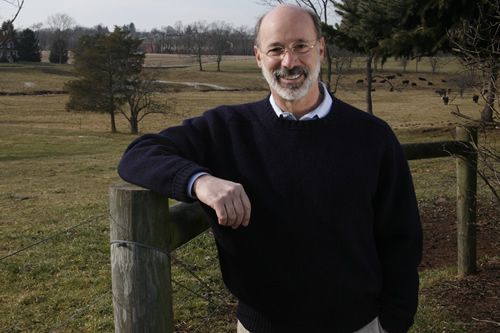 Will Pennsylvania’s Democratic Gov. Tom Wolf win a second term in the rapidly approaching 2018 statewide election? Or will he become another “one term Tom,” losing his bid for a second term, as did his immediate predecessor, Republican Tom Corbett.

Since a constitutional change in 1968 permitted governors to seek a second term, each has done so, beginning with Milton Shapp in 1974.  And all but one, Corbett in 2014, won reelection, most of them handily.

Winning a second gubernatorial term has been the default position for the past half-century. Indeed, that expectation prior to Corbett’s 2014 loss was once considered an iron law of Pennsylvania politics known as the “eight-year cycle.”

So, as we approach the 2018 election we come to a fork in the road for Pennsylvania incumbent governors. Will we return in 2018 to the familiar cycle of governors being comfortably elected to a second term – or will we see another first term governor defeated for re-election as happened four years ago?

Polls are of limited use this early. Wolf, however, does not face any opposition to a second Democrat nomination in the scheduled May party primary.

On the other hand, he has attracted a field of four GOP challengers so far including state Senator Scott Wagner, House Speaker Mike Turzai, attorney Laura Ellsworth, and businessman Paul Mango. Moreover, Wolf has had a bullseye painted on his back since being tagged as America’s “most liberal governor.”

While Wolf leads what appears to be a newly energized Democratic Party and electorate, his Republican opponent should enjoy the still enormous Trump support in the rural areas and small towns across the state.

In this decidedly mixed milieu, three fundamental political factors are going to matter most: the national mood; the importance of “change” to voters; and the Wolf record.

Wolf’s reelection campaign will play out against the background of the 2018 national midterms. At the moment, this background appears unusually toxic for Republicans. One negative for the GOP is the traditional midterm bias against the president’s party. Historically, the ruling party in Washington has lost 30 House seats and four Senate seats in midterms going back to the 1930’s. Then, too, Trump’s historically low approval ratings loom portentously.

Many analysts believe a Democratic “tide” is possible, one which would sweep away many GOP incumbents.

But the national mood is neither static nor predictable. With the 2018 election still more than ten months away much can happen to shift support toward Republicans. Nevertheless, the existing zeitgeist suggests a large Democratic tide in 2018, raising a formidable challenge to a successful Wolf challenge.

The electorate’s desire for change may be the wild card in Wolf’s re-election chances. Incumbents running in a pro-change atmosphere are often defeated. And the call for change can be a potent campaign theme against incumbents. In fact, Donald Trump won the presidency portraying himself as an anti-establishment candidate and change agent.

This year, the four Pennsylvania Republicans challenging Tom Wolf sound similar themes, contending that Wolf is just another liberal, tax-and-spend Democrat. One of them, Wagner, is running as an unabashed Trump supporter.

The political unknown is whether change appeals will draw voters in 2018 – or whether ties to Trump – either stylistically or personally will attract or repel voters. During Wolf’s first campaign he did present himself as an agent of change and reform – as an antidote to the failed policies of his successor. In 2018, as an incumbent he will be much more the candidate of the status quo.

Every election is a referendum on the incumbent, and this one will be no exception. Wolf’s record is largely encapsulated within four years of battles with the GOP dominated legislature over budgets, deficits, taxes and spending.

Wolf has not shied away from proposing increases in statewide taxes such as the income tax, and more consistently a Marcellus shale tax to deal with the state’s multibillion-dollar deficits. For Wolf’s first three years, this produced annual impasses between a Republican legislature and a Democratic governor – resulting in late budgets, underfunded or unfunded programs, and a morass of short term accounting gimmicks needed to “balance” the state’s budget.

By any fair measure, these perennial fiscal gunfights have ended in a bloody draw – with Republicans blocking any significant new taxes – while Democrats led by Wolf have kept state government’s lights on, but they been frustrated in advancing other priority programs.

While Wolf has, Houdini–like, escaped voter wrath for the fiscal hijinks pervading Harrisburg, he has also failed to substantially advance anything that could be called a coherent agenda. Divided government in Pennsylvania has produced governmental paralysis, presenting perhaps Wolf’s largest threat to re-election.  More than three years of virtual trench warfare with GOP legislators has produced more than three years of stalemated state government.

Wolf’s great good luck could be that apparently many Pennsylvanians like that just fine.