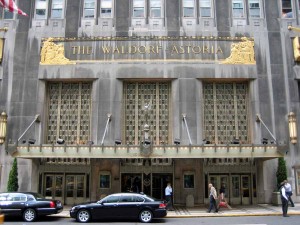 The migration to New York City has already begun for many Pa. politicos. Check out PoliticsPA’s 2011 List of Events to see what’s going on when.

The weekend will be all about redistricting: both the state and congressional plans are due out Monday, and most of the map drawers will be in NYC.

Whether its your first time going, or your 20th, it can’t hurt to brush up on these ten survival tips, courtesy of the Inky’s Tom Fitzgerald.

Let’s face it, you can’t attend every reception at Pennsylvania Society (nor would you want to). Here’s are the top ten places you want to be this weekend, in chronological order:

Holiday Cocktails: Christine J. Toretti
This party is one of the weekend’s must-attends for a decade, and the place to be for Republicans. It’s also very exclusive, so don’t show up without an invitation in hand.
Thursday, 6:00pm
Club Macanudo, 26 East 63rd Street
By Invitation

GOP Senate Debate
Maybe this isn’t a big deal compared to the reception scene, but we’re interested to see these candidates in action. This event will immediately follow the Pa. GOP State Committee fundraiser at the same hotel and will be the first prime-time event of the crowded primary.
Friday, 2:00-3:00pm
Plaza Hotel, Champagne Suite
5th Ave. & Central Park South
Sponsored by the Pennsylvania Business Council’s Education Foundation.
RSVP here.

Children’s Champion Reception
This is typically one of the weekend’s most fun events and definitely worth stopping by. More than anything else this weekend, this one is for a good cause.
The Waldorf-Astoria, Starlight Roof, 18th Floor
Friday, 5:30 -7:30pm
6:15 awards to Congressman Chaka Fattah and State Rep. Katherine Watson
Hosted by the Children’s Hospital of Philadelphia
By Invitation

IBEW Local Union 98 Party featuring Jerry Blavat
What could be more fun than a party with Johnny Doc? This is typically one of the weekend’s biggest and most fun events. Expect big band music, good times, and a whole lot of Pa. and Philly politicos.
Friday, 9:30 p.m.—12:30 a.m.
The Waldorf-Astoria, Hilton Room

Governor Mifflin Society/PoliticsPA Reception
We toot our own horns, but this is the must-attend party of the weekend. It’s always a blast and it’s where the top politicos finish out their Friday night. Anyone who’s anyone will be there – including Sy Snyder himself.
Friday, 10:00 p.m.—1:00 a.m.
The Waldorf-Astoria, Louis XVI Suite
By Invitation
Hosts: American Continental Group, Liberty Square Group, Ceisler Media & Issue Advocacy, McNees Wallace & Nurick LL, Command Strategies, LLC, Norfolk Southern, Stradley, Ronon, Stevens & Young, LLP

Annual Seminar and Luncheon: PMA and Wells Fargo
It’s an intel bonanza for insiders far and wide. This is one of the most important events of the weekend – and one of the toughest to get into. Don’t show up unless your name is on the list.
Saturday, 9:00 a.m. Seminar begins, lunch follows
The Metropolitan Club, One East 60th Street
By Invitation
Frederick W. Anton, President & CEO- PMA, and Hugh Long, Regional President, Pennsylvania/Delaware. Dr. Terry Madonna, Moderator

Bob Casey Fundraiser
Casey will get back to his Irish roots at one of Manhattan’s best Steelers bars. Be on the lookout for Democratic and Republican politicos alike in this crowded, fun fundraiser.
Saturday, 2:00-4:00pm
The Irish Exit – 978 2nd Ave (at 52nd St)
($125/$275/$1,000)
RSVP Encouraged

Buchanan Ingersoll & Rooney Cocktail Reception
It’s a black tie affair and one of the weekend’s fanciest receptions. Look for several members of the Pa. congressional delegation here – and some of the best food of the weekend.
Saturday, 4:00-6:30 p.m.
The Waldorf-Astoria, Starlight Roof, 18th floor
By Invitation

The Pennsylvania Society 113th Annual Dinner
This is the keystone event of the Pa. Society – the reason we’re all heading to NYC to begin with.
The Waldorf-Astoria
6:00 p.m. Reception—East Foyer
7:00 p.m. Dinner—Grand Ballroom
Gold Medalist: Guion S. Bluford, Jr.
By Invitation: Members: $350; Non-members: $400

Premier Party, hosted by the Energy Association:
There are lots of great after parties to choose from, but if you can only go to one we recommend this one. You have one more night to catch up on all the insider chatter – do it here.
In Harmony, following the Society dinner (~9:30pm – 1:00am)
The Waldorf-Astoria, Marco Polo Room
By Invitation