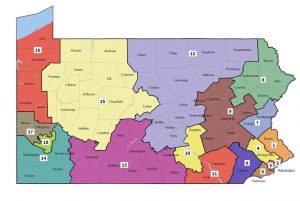 A lot has changed since last Oct. 30, when we published our last Pennsylvania congressional vulnerability ranking.

Actually, saying it was “a lot” of change is an enormous understatement.

The GOP’s midterm outlook in the Keystone State, already under stress from the growing likelihood of a Democratic wave in the fall, took a body blow earlier this year when the Pennsylvania Supreme Court voided the existing, Republican-tilted congressional district map. Due to a combination of these factors, endangered Republican incumbents announced their retirements.

The incumbents who held the two most vulnerable seats in our October rankings – Ryan Costello and Pat Meehan — have since decided against seeking another term, making their seats even more vulnerable for the GOP. They joined other Republican incumbents who had previously announced their departures, including Charlie Dent (our previous No. 4 most vulnerable seat) and Tim Murphy (our previous No. 7).

Previously, our list included nine seats; now it has expanded to 10. And the scope political shift has wreaked havoc with our previous rankings.

As always in our ratings, the districts are ranked in descending order, from most vulnerable to less vulnerable. We only consider seats that are vulnerable to a party switch in the general election, not to losses by an incumbent to a primary rival.

Republican Rep. Pat Meehan, first elected in 2010, already faced a tough path to reelection when he was driven to retire amid allegations of sexual harassment brought by a former staffer. Then, Meehan’s district, already tilting to the Democrats, became a virtual lock to flip control this year under the new lines – Hillary Clinton would have won it by 28 points in 2016. The Democratic primary is almost certain to determine the winner in the fall. But the field is wide open and, with more than a dozen candidates, nearly impossible to handicap at this point; it could end up being a “friends and family” contest where small differences in turnout produce a winner with just a small percentage of the overall vote. The contenders include (in alphabetical order) attorney George Badey, former CIA official Shelly Chauncey, state Rep. Margo Davidson, state Rep. Thaddeus Kirkland, former Philadelphia deputy mayor Rich Lazer, former federal prosecutor Ashley Lunkenheimer, activist Lindy Li, attorney Dan Muroff, and state Rep. Greg Vitali — among others. Republicans are resting their diminished hopes in the district on former prosecutor Pearl Kim.

The district that Costello and, before him, fellow Republican Jim Gerlach held during the past decade was fiercely contested turf between the two parties. But the new district lines increased Clinton’s performance in 2016 from a one-point victory to a 10-point edge. Costello saw the writing on the wall and decided to bow out. Democrats were already optimistic about their candidate — Chrissy Houlahan, a Stanford- and MIT-educated Air Force veteran and businesswoman with a strong fundraising record. Republicans have been attacking Houlahan for her history of foreign outsourcing, but with Costello’s exit, they are left with Greg McCauley, an untested former Wendy’s franchise owner who has not yet reported any money raised.

This is a rarity in Pennsylvania this year – a vulnerable Democratic seat. But there’s an asterisk. Democrat Conor Lamb defeated Republican Rick Saccone in a closely watched special election, in a district that had supported Donald Trump in 2016 by 20 points. But the new map opened up a friendlier district to the north for Lamb, so he’ll be competing there later this year instead. The district Lamb is giving up is even more strongly pro-Trump than it had been before the redrawing, so the Republicans start as a strong favorite. Saccone is running again, as is the candidate he defeated at the special election nominating convention, state Sen. Guy Reschenthaler, a former judge and Navy veteran. The Democrats have several candidates, including one in whom party officials see some promise — Bibiana Boerio, a former senior automobile executive and an aide to then-Rep. Joe Sestak. But any Democrat will start as a heavy underdog in this district.

Dent is another vulnerable Pennsylvania Republican who decided to retire rather than fight for reelection in 2018. The district previously gave Trump an eight-point win, but under the new lines, it would have given Clinton a one-point win. The Democratic primary includes Northampton County district attorney John Morganelli, former Allentown solicitor Susan Wild, and pastor Greg Edwards, among others. Morganelli is best known in the district from his long tenure as a prosecutor; despite some liberal stances, his strong position against illegal immigration could pose problems in the Democratic primary. Democrats acknowledge that the two Republican candidates vying in the primary are credible: Lehigh County Commission chair and Olympic cyclist Marty Nothstein, and former Lehigh County commissioner and businessman Dean Browning. Bottom line: This should be a competitive contest in the fall.

This is the seat Lamb decided to seek. It’s a bit of a tougher lift than the three Democratic-opportunity seats above — both because Lamb needs to defeat an incumbent, and because the district, even under the more favorable lines, would have backed Trump by two points in 2016. But Lamb received major attention in the Pittsburgh media market during his special election bid, and even with the district’s narrow Trump lean, it is still much more evenly divided than the one Rothfus has been representing. While Lamb is the likely nominee, he won’t have an entirely clear shot — he faces a challenge from his left by Ray Linsenmayer.

Fitzpatrick succeeded his brother Mike in 2016, and his seat was going to be vulnerable under any circumstances in this swingy district. Redistricting didn’t change the political lean dramatically, but what changes were made marginally helped the Democrats. Moreover, the Democrats won several county row offices in late 2017 for the first time in decades, a sign of energy for the party. The Democrats do have a competitive primary; it features Navy veteran Rachel Reddick, philanthropist Scott Wallace and activist Steve Bacher. Republicans are hoping to tag Reddick and Wallace, the two frontrunners for the nomination, as carpetbaggers, while highlighting Fitzpatrick’s unwillingness to go along with his party on repealing Obamacare. Complicating Fitzpatrick’s path is a primary challenge from the right by Trump-aligned veteran and attorney Dean Malik.

With the exception of the district Lamb is leaving behind, Cartwright’s is the sole Democratic vulnerability in Pennsylvania this year. In his old district, Cartwright won reelection despite seeing it shift from a 12-point Obama win in 2012 to a 10-point Trump victory four years later. Under the redrawn lines, the district continues to pose a challenge for the incumbent, but it shifts geographically toward Scranton – Cartwright’s base, where he was a well-known attorney before running for Congress. The GOP continues to be high on primary frontrunner John Chrin, who has served as a managing director at J.P. Morgan Chase and has been sinking significant personal funds into his campaign. Were it not for the likelihood of a Democratic wave this year, this seat would rank higher on our list – and could be at greater risk in a less favorable year for the Democrats.

The district, a new addition to our list, moved towards the Democrats due to the remap, from a 22-point Trump win to a nine-point Trump victory. So on paper, Perry, a staunch conservative, should be in some danger. But the Democratic field just lost its most prominent candidate – Christina Hartman, who had challenged GOP Rep. Lloyd Smucker in 2016. The remaining field includes epidemiologist Eric Ding, Army veteran and pastor George Scott, former Senate and Obama aide Shavonnia Corbin-Johnson. Democrats hope that a wave and the fact that the district is in a relatively cheap television market could make this a sleeper race.

This seat is new to our list, thanks to redistricting, which shaved a few points off Trump’s margin in the district, although it still leans pretty heavily Republican. Democrats are hopeful that Ron DiNicola – a longtime figure in the district who was a Marine boxer and lost narrowly (several maps ago) in a 1996 House contest – will be positioned to ride a Democratic wave this fall.

Barletta is running for Senate, and we had included this seat as our eighth-ranking of nine seats on our list last October. The Democrats’ prospects are now weaker than they were last fall, however, thanks to line changes that made the already solidly Trump district a bit more so. Whoever wins the Republican primary – a battle between Schuylkill County Commission chair George Halcovage, former state revenue secretary Dan Meuser, and former CIA official Scott Uehlinger – is the odds-on favorite to win in November. Still, we’re keeping this on our list because of the Democratic candidacy by Dennis Wolff, a dairy farmer and former state secretary of agriculture who’s considered a credible candidate, despite the difficult partisan terrain.

Both of these seats were on our previous list, but are no longer competitive due to changes in district lines that favored the GOP incumbents.