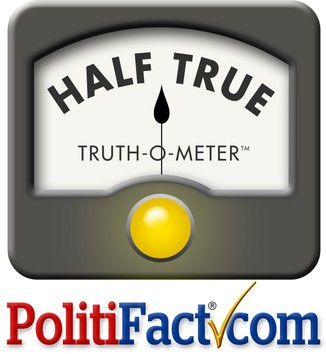 According to PolitiFact, a non-partisan fact-checking website founded by the St. Petersburg Times, the statements made in the Republican National Committee’s new web video attacking President Obama’s economic record in Pennsylvania are half true.

The 30 second video compared Obama’s 2008 Scranton visit and the promises he made in that speech to the current economic climate, evaluating what occurred since he took office. The most questionable fact in the ad was the number of manufacturing jobs lost.

The ad states that 37,900 manufacturing jobs were lost under Obama’s watch. The number is accurate according to the Bureau of Labor Statistics, however PolitiFact points out that policies enacted by politicians are just one factor driving this decline. When looking at manufacturing jobs, it is important to take into account the fact that the last 50 years has seen a huge drop in U.S. manufacturing jobs nationwide, due to factors such as free trade or technology.

“In other words, during the worst economic conditions since the Great Depression, Pennsylvania manufacturing job losses declined less than half as quickly under Obama as under Bush.”

However, the video’s other claims were fair game.

On the issues of poverty, there was actually an increase of 186,000 people living in poverty and not 189,000 people as the ad says, but PolitiFact deemed this number “close enough”.

The video was part of a series of GOP attacks on Obama keying in on his Scranton visit Wednesday to advocate extending and expanding payroll tax cuts.  Many Republicans in Pennsylvania said they support the idea, but accused the president of campaigning in crucial swing states like Pennsylvania on the taxpayer’s dime.  All of Pa.’s GOP delegation voted against the measure in Congress yesterday.