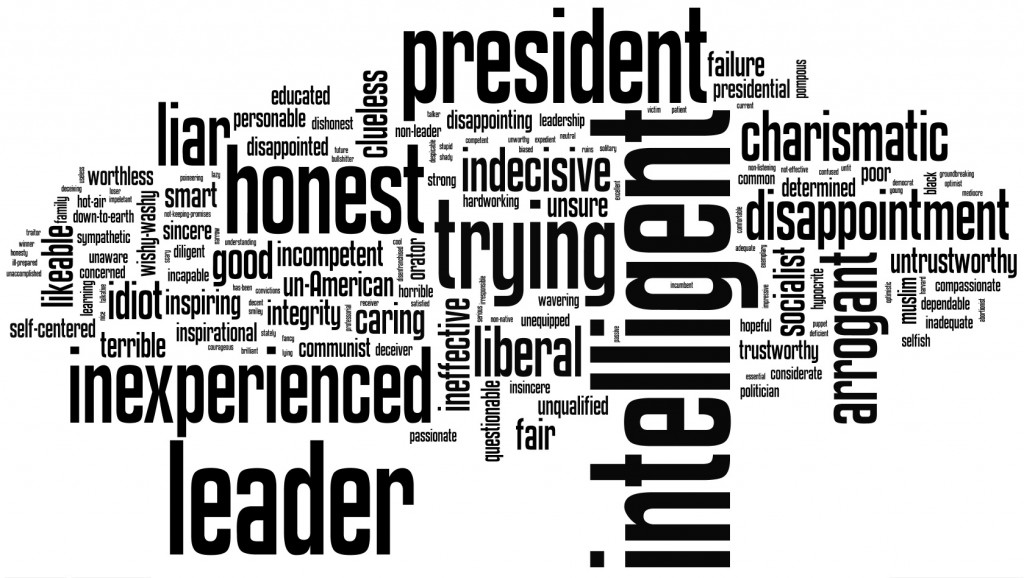 Erie – Barack Obama leads Mitt Romney 44 to 36 percent among Pennsylvania women, a recent poll has found. Romney was the only Republican candidate tested.

64 percent of female voters within PA believe that the U.S. economy is on the wrong track, but despite that fact, 79 percent of the women surveyed who voted for President Barack Obama in 2008 feel that they made the right choice.

Female voters were asked to grade Obama. While 26 percent of women gave Obama a B, his grades averaged out to a C.

One-word descriptors even placed Obama more favorably in the eyes of PA’s female voters; “intelligent,” “leader,” & “honest” were among words used to characterize the President (image above). Romney, on the other hand, was classified as “businessman,” “Mormon,” and “arrogant” (image below).

31 percent of the female voters polled considered themselves Republican, while 42 percent called themselves Dems. 23 percent were Independents.

To maximize the accuracy of MCAP’s results, the data was weighted on age, race, and party and adjusted to represent the population from which the sample was drawn.

MCAP interviewed a total of 598 subjects. There was a 95 percent probability that the results are within a +/- 4.01 percentage point margin of error. Within MCAP’s survey, a variety of techniques were employed to reduce common sources of non-sampling error, such as calculating the response rate of those who wish to participate in a study and those who do not. Respondents were contacted during the weekday hours of 6:00pm and 9:00pm and sometimes on Saturday mornings and afternoons. No fewer than eight attempts were made in order to make contact with individuals. Research associates use conversion techniques, consistent with research ethics, to reel people into interviews, ensuring high rates of cooperation.

Dr. Morris and Dr. Peterson would agree that when you have a room full of research associates, interviewing respondents, MCAP truly transforms into a magical atmosphere. Complete an interview, receive a Swedish fish; every research associate has incentive.

The writer is a former Research Associate at the MCAP.