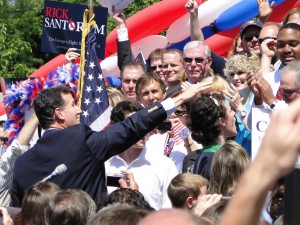 Former Pa. Senator Rick Santorum has the support of about a third of his former Republican constituents, a Quinnipiac University poll found this week. But he comes within 1 point of President Obama in a matchup here, compared to a 6 point deficit for Mitt Romney.

However though Obama’s job approval is higher than it’s been in months, he’s still in negative territory: 47 percent approve, 49 percent disapprove.

Santorum’s primary strength comes from his support among lower-income voters. He trails Romney only among those households with an income of greater than $100,000. He leads in every other bracket, including by a startling 49 to 14 percent margin in households earning under $30,000 per year.

“Pennsylvania Republicans are turning to their native son, former Sen. Rick Santorum. The last time we surveyed the Keystone State, during the Gingrich boomlet in December, the former House Speaker led the GOP pack with 31 percent, followed by Gov. Mitt Romney with 17 percent and Santorum with 9 percent,” said Tim Malloy, assistant director of the Quinnipiac University Polling Institute.

For months, polls of Pa. Republicans showed the flavor of the month candidate – Herman Cain, Rick Perry, and Newt Gingirch, for example – leading the pack. Prior to now, he highest percent of the primary electorate in a June 2011 Q-Pac poll at just 16 percent. Only after Santorum proved his mettle by winning Iowa did Keystone GOPers begin to return to the fold.

The numbers show growth for Santorum from another survey conducted before his win in Iowa, but probably don’t show enough strength to ward off a competitive effort by Romney.

Another survey, released Tuesday by Public Policy Polling, showed Santorum with a 17 percent advantage over Romney. Not insurmountable for a candidate like Romney with immense financial resources.

In the past 24 hours, Romney announced the endorsement of former Pa. Governor Tom Ridge and unveiled endorsements from a number of GOP leaders in the state, including four congressmen.

Why would Romney risk a play in Pa.? Because if he can beat Santorum here, he can make an rock solid case that he should be the nominee. Plus, Romney can topics that play well here and almost exclusively here to like the former Senator’s endorsement of Arlen Specter in 2004 and his empty Penn Hills home in 2006