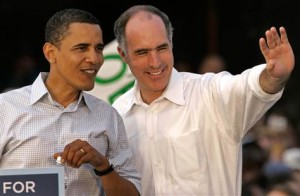 A recent poll released Friday by the Muhlenberg College Institute of Public Opinion and the Allentown Morning Call show President Obama and Senator Casey’s approval ratings are on the rise in Pennsylvania.

Although 50 percent of Pennsylvanians still disapprove of the job Obama is doing, His overall approval rating in PA has risen to 45 percent with the remaining 5 percent unsure.  He is up 10 points from an August 2011 survey, which is said to be the result of the then August debt-ceiling debates, and his disapproval rating is shrinking, it has dropped 8 points since the August 2011 survey.

In this recent poll by Muhlenberg College, the President’s numbers against an unnamed Republican candidate take the vote by roughly 8 points with a 45 percent to 37 percent breakdown.  Nevertheless, President Obama isn’t in the clear yet, 14 percent of those polled say it depends who the Republican candidate is.

Although Mr. Obama’s numbers are rising, Pennsylvanians still aren’t convinced he deserves re-election. Only 41 percent compared to 51 percent believe he should have another term as president while the remaining 9 percent did not site a preference.  It is evident that Pennsylvanians are again in pursuit of change, one that is the opposite of last presidential election.  President Obama faces what is now a current uphill battle in a state where he won by over 600,000 votes in 2008.

The Muhlenberg College Poll opinion on Pennsylvania echos this larger scale USA TODAY/Gallup Poll on swing states.  Given this current climate, Pennsylvania is screaming for attention from Republican Presidential campaigns, the signs are there, the constituents are energized and willing to be won over. Both polls indicate there is no guarantee President Obama will be able to come away with the popular vote in Pennsylvania.  In the Muhleburg College poll the President eeked by in a match-up with Republican candidate Mitt Romney 45 -41 percent.

On the other hand, the Muhlenberg College poll shows Senator Casey experiencing an enormous rebound in overall support from Pennsylvanians as well as his political party. The Senator has crossed the 50 percent mark,  earning a 54 percent approval rating, rising 14 percent from a pre-Thanksgiving survey.  His disapproval rating dropped 11 points down to a rating of 24 percent.

Pennsylvanians applaud the Senator as 54 -27 percent say he deserves re-election.  When put up against a generic Republican candidate, Casey wins 49 -27 percent. The remaining did not answer or said it depended on the republican candidate.  No matter how you look at it, this poll denotes Senator Casey as a safe incumbent, even when considering the USA TODAY/Gallup Swing States survey.

The Muhlenberg College Institute of Public Opinion poll surveyed 477 registered PA voters via telephone between November 28 and December 7. Margin of error for this survey is +/- 5%.