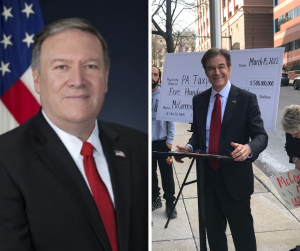 Former Secretary of State Mike Pompeo called on Republican candidate for the U.S. Senate Mehmet Oz and his campaign to explain the involvement that the celebrity doctor has had with Turkey.

Pompeo, a supporter of GOP Senate candidate Dave McCormick, held a press briefing organized by the McCormick campaign to address issues that arose from a recent ABC News’ report about Oz.

“When, when we see reports that he chose to vote in a Turkish presidential election, but not in an American election, we criticize candidates in America all the time because they didn’t vote,” the Trump administration official said. “People look at their voting records, “oh, they didn’t vote in six of the last nine elections or four of the last five suggesting that they weren’t engaged in the political process.” This is different from that.”

“Not only did he not engage in the American political process, but he engaged in the Turkish political process and that raises in, in my mind, lots of judgments about his priorities and we need to get him and his team to explain why he had time and energy and focus to vote in a Turkish election, but not in an American election. And you stack that up with some of the work that he has done. Some of the political involvement he’s had with Turkey. And I think that the campaign owes the people of Pennsylvania, the Mehmet Oz campaign, owes the people of Pennsylvania an explanation for this.”

Pompeo also explained his support of McCormick. “As many of you know, I’ve known Dave McCormick for an awful long time. Since we were cadets (at West Point). I’ve campaigned hard for him. He is a strong, conservative believer in the things that conservatives in Pennsylvania stand for.”

When asked about his dual citizenship with the United States and Turkey, Oz explained recently that he keeps his Turkish citizenship to care for his mother, who suffers from Alzheimer’s Disease. When queried what he would do if this would disqualify him from security clearances, Oz stated that he would forego them in this situation, noting “I can love my country and love my mom.”

The next day, Oz backtracked from that statement and indicated that he would renounce his Turkish citizenship if elected.

Oz was born in Cleveland, Ohio, and attended Tower Hill School in Wilmington, Del. He earned his undergraduate degree from Harvard University in 1982 and went on to receive a joint MD and MBA from the University of Pennsylvania and The Wharton School of Business.

His parents were born in Turkey and under Turkish nationality law, children born to a Turkish mother or a Turkish father are Turkish citizens from birth. Oz served in the Turkish military to maintain dual citizenship.

“I had the privilege, as the son of immigrant parents, to grow up American while staying deeply in touch with my Turkish roots,” Oz told SJ Magazine in 2011. “I have a great deal of family back in Turkey, I lived there for a period as a boy, and I served in the Turkish military, which is compulsory for dual citizenship.”

In response, Oz spokesperson Brittany Yanick stated that “these are pathetic and xenophobic attacks on Dr. Oz by David McCormick, who should be ashamed of himself. Now that he lost President Trump’s endorsement, he’s resorted to sad and desperate attacks that are no different than the tropes used against Catholics and Jews.”

To be clear on the law, there is no prohibition against dual nationals serving in Congress. “The only qualifications for serving in Congress are age, being a U.S. citizen for at least nine years for the Senate, and living in the state you represent at the time of election,” said Molly Reynolds of the Brookings Institution to Politifact.

Unlike officials at federal agencies, lawmakers do not have security clearances per se, experts told Roll Call. Rather, members of Congress are by tradition deemed inherently trustworthy by dint of the offices they hold, although they are subject to punishment under the Senate ethics code for revealing classified information.

“Because of a clearance process they’ll be provided that information because they’re dually entitled to it because they were elected to represent the people of their district or in this case of the state of Pennsylvania.”

“The election of a dual citizen would raise novel security policy questions,” said Steven Aftergood, director of the Government Secrecy Project with the Federation of American Scientists, in an email.

Aftergood concluded that he “would expect congressional leaders to reach an understanding with the new, dual citizen member that would authorize classified information sharing under certain ground rules and with some limitations.”

History has examples of dual citizenships by presidents, including James Buchanan and Chester Arthur, both British subjects. It was Theodore Roosevelt who first raised the question about dual citizenship in regard to politics, calling it a self-evident absurdity. Most recently, Ted Cruz’s Canadian citizenship was raised when he ran in the Republican presidential primaries in 2016, despite renouncing two years earlier.

“Is [Oz] really an agent of the government? There’s not really any evidence of that,” said Steven Cook, senior fellow at the Council on Foreign Relations. “But if Oz has business connections that rely on being in the good graces of the government, there are legitimate questions about his views on these issues.”